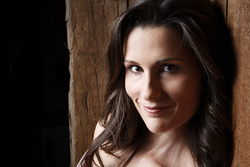 Bio: American soprano Kimberly Monzón is Assistant Professor of Voice at Baylor University. Dr. Monzón is currently conducting new research in collaboration with The Ohio State University Voice and Swallowing Disorders Clinic with a focus on hormones and the female classical voice. Current research at Baylor University focuses on the effect of Omega-3 fatty acids on the singing voice. She received her Doctor of Musical Arts in Voice with a specialization in Singing Health from The Ohio State University under renowned teachers Robin Rice and Scott McCoy. During her doctoral studies, she was awarded a full University Fellowship and won first place in the OSU Wilson Award competition. As a student in the Singing Health Specialization program at OSU, Dr. Monzón observed thirty hours of voice surgeries at the OSU Wexner Medical Center, fifty clinic hours at the OSU Voice and Swallowing Disorders Clinic, and served as lab assistant in the Swank Voice Teaching and Research Lab. She holds a Master of Music in Voice Performance from University of Houston, and a Bachelor of Music in Voice Performance from the University of Missouri-Kansas City. Dr. Monzón has been delighting audiences in regional opera houses and concert halls throughout the country. She most recently performed Susanna in Le nozze di Figaro, Magda in La rondine, was the soprano soloist in Carmina Burana, and sang the title role in the world premiere of Ramala by Charles Wakefield Cadman, all with the Ohio State Lyric Opera Theater. She made her mainstage debut with Pensacola Opera as Frasquita in Carmen, and covered the title role in Lucia di Lammermoor. As a crossover artist, she has appeared with Opera Idaho in Jacques Brel Is Alive and Well and Living in Paris, and as Johanna in Sweeney Todd and Lady Larken in Once Upon A Mattress. Dr. Monzón starred as Serafina in Il campanello di notte, and Zerbina in La serva padrona with Spokane Opera. Other roles to her credit include Tytania in A Midsummer Night’s Dream, Lucy in A Room with a View, and Erste Frau in Die Zauberflöte. An enthusiastic recital artist, Dr. Monzón has performed a wide variety of concert and recital repertoire including Haydn’s Paukenmesse and Theresienmesse, Vivaldi’s Gloria, Berg’s Sieben frühe Lieder, Spanish song, opera and jazz repertoire for organizations such as Opera Columbus, Ohio Latino Affairs Commission, Coeur d’Alene Symphony, Miami Dade College, and various venues in New York City, Miami, and Columbus. Dr. Monzón’s students have been accepted into prestigious classical and music theater programs across the country, including Manhattan School of Music, Ball State University, Otterbein University, Binghamton University SUNY, and the University of Puget Sound, and are performing mainstage roles in many professional theaters and companies. She has maintained private voice studios in New York City, Miami, Houston, Kansas City, Columbus, and Spokane, and holds full membership in the National Association of Teachers of Singing.