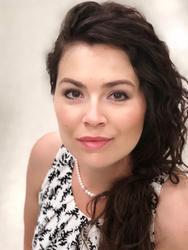 Title: Voice Instructor
Bio: Elisa Ramon is a native Italian soprano, voice teacher, and diction coach. She holds a Diploma in Voice (B.Mus. + M. Mus.) and a M.Mus. in Music Education from the Cesare Pollini Conservatory of Padua, together with a B.A. in Musicology from the University of Padua. In addition, she is certified in Levels I, II, III of Somatic Voicework™, for CCM, and she is a licensed teacher of Italian. As a scholar, Ms. Ramon researches Italian diction and its application to achieve ease and clarity while singing Bel Canto. Likewise, she actively performs and researches Ibero-Latin music, promoting the application of Spanish in developing vocal technique. She is also the creator of The Italian IPA Project, an online video repository of audio sync IPA transcriptions. Ms. Ramon has been primarily active as soloist and recitalist, with performances in such venues as St. Peter’s Basilica in Rome, St. Francis’ Basilica in Assisi, St. Anthony’s Basilica in Padua, and the Basilica of Frari in Venice. Concurrently, she appeared in productions in Northern Italy, singing the roles of Mademoiselle Silberklang in Mozart’s Der Schauspieldirektor (Vicenza, Teatro Olimpico), Serpina in La Serva Padrona (Padua, Rimini, Verona), Bastienne in Bastien und Bastienne (Padua, Piove di Sacco, Treviso, Venice), and Suora Zelatrice in Suor Angelica (Padua). An advocate of the 20th-Century Italian Art Song, she also performed works by lesser known composers, including Omizzolo, Lincetto, Bossi, and she premiered the CD recording of the art songs by the Apulian composer Michele Bellucci, with pianist Davide Osellame. As Operaperta Duo, with guitarist Alessio Olivieri, she has performed throughout Italy, Australia, New Zealand, and the USA. The duo has premiered works by such composers as Mark Delpriora, and recorded a CD featuring Spanish and Italian songs. Ms. Ramon teaches applied voice, and classes of Italian and French diction at University of North Texas. Prior to that, she taught at Edinboro University of Pennsylvania.
Voice Type: Soprano
Music Styles Taught: World; Pop; Opera; Rock; Classical; Musical Theatre
Availability: I am available as a performer; I am currently accepting private students; I am available as a clinician or presenter; I accept students through a college or university program