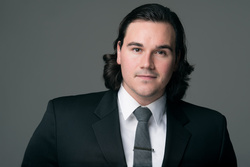 Title: Adjunct Associate Professor of Music
Bio: Evan Garret Stenzel is an up and coming American tenor from Iowa Falls, Iowa who currently resides in Millburn, New Jersey. Mr. Stenzel has proven himself to be equally as cunning and vocally charming on both the operatic and musical theatre scene. He is comfortable in Rossini to Mozart as well as classical to contemporary musical theatre. He was most recently featured in Finger Lakes Opera’s 2019 production of La Bohéme as Parpignol. There he was directed by the prestigious Michael Ehrman and Gerard Floriano. He has resided at Finger Lakes Opera for the past two years (2018-2019) as a member of their Young Artist Program. Through this he performed numerous scenes from operas such as Rigoletto and Les pêcheurs de perles, where he portrayed the roles of the Duke and Nadir, respectively. He also performed leading roles in two of their children’s operas. Prior to this, he completed his Masters Degree at Westminster Choir College of Rider University in Princeton, New Jersey where he studied under the direction of Christopher Arneson. While in Princeton, Mr. Stenzel was seen as Jenik in Smetana’s The Bartered Bride and Fenton in Verdi’s Falstaff. He completed his undergraduate degree in Vocal Music Education from Iowa State University. There he was seen in numerous musical theatre and opera productions- Les Misérables as Jean Valjean and Fiddler on the Roof as Motel are among his main credits. His website is evanstenzeltenor.com
Voice Type: Tenor
Music Styles Taught: Pop; Opera; Rock; Classical; Musical Theatre
Availability: I am available as a performer; I am currently accepting private students; I am available as a clinician or presenter; I accept students through a college or university program