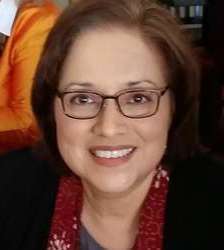 A native of Santa Barbara, CA, Vivian Dettbarn-Slaughter studied in the DMA Voice Performance program at the University of Memphis, where she also worked as a coach-accompanist in the opera department. She received a Doctor of Sacred Music degree at the Graduate Theological Foundation, a Master’s Degree in Voice and Education at Appalachian State University, and a Bachelor’s Degree in Piano Performance at the University of California at Santa Barbara. Vivian has performed major roles in The Barber of Seville, Tartuffe, Cosi Fan Tutte, La Serva Padrona, Hansel and Gretel, West Side Story, The King and I, A Game of Chance, Patience, and Amahl and the Night Visitors. She was an Artist-in-Residence with the Toledo Opera, and has performed in recital in the U.S., Canada and Europe. In concert, Vivian has performed as the soloist in Faure’s Requiem, Handel’s Messiah, Vivaldi’s Gloria, Britten’s Ceremony of Carols, Bach’s Christmas Cantata, and Mozart’s Requiem. She has performed as a soloist with choirs and orchestras in California, North Carolina, Ohio, Tennessee and Michigan, and has had an active career as a pianist and chamber musician.

Dr. Dettbarn-Slaughter has taught at Appalachian State University, the University of Memphis, The University of Findlay, and Adrian College, where she also taught courses in Musical Theater. She has had a long career as a church musician. She is a Professor Emeritus and Fellow at the Graduate Theological Foundation, where she was a Professor of Sacred Music. She maintains a private studio in Ypsilanti, Michigan, and is the author of “The Vocalist’s Toolbox: A Portable Workshop for Singers.”