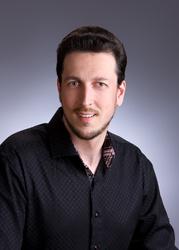 Title: Lecturer in Voice/The University of Texas at Austin

​From the outset of his professional career, Mikhail Smigelski toured Russia, Europe, and the United States, not only as an opera soloist but also as part of various vocal ensembles, a conductor, and a collaborative pianist. His operatic portrayals include over 30 roles including both Figaro and Bartolo in Le nozze di Figaro, Leporello in Don Giovanni, Don Alfonoso in Cosi fan tutte, Don Basilio in Il barbiere di Siviglia, Raimondo in Lucia di Lammermoor, Ferrando in Il Trovatore, Nikitich and Varlaam in Boris Godunov, title roles in Falstaff and Eugene Onegin, and others. As a passionate advocate for contemporary classical music, Mikhail Smigelski also performed in a number of world and USA premieres including Switch by John Aylward with East Coast Contemporary Ensemble, Golden by Michael Zapruder at Cohen New Works Festival, and Orpheus by Evan Lawson with Density 512. Dr. Smigelski began his advanced musical studies at the Rimsky-Korsakov Conservatory in St. Petersburg, where he received the Bachelor of Music degree and, subsequently, Hochschule für Musik und Tanz in Cologne, Germany, where he completed the Master of Music degree in opera performance. Upon moving to the United States he earned the Master of Music degree in choral conducting at Sam Houston State University and is the Doctor of Musical Arts degree in opera performance at the University of Texas at Austin. In addition to his performance career, Dr. Smigelski is a Lecturer in Voice at The University of Texas At Austin, a Director of Music Ministries at The Woodlands Christian Church, Music Director at Opera Leggera, and an accomplished audio producer.