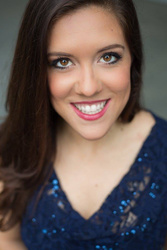 Kristen DiNinno is an active mezzo-soprano whom has performed with companies such as The Opera Theatre of Saint Louis, Florentine Opera, Des Moines Metro Opera, Shreveport Opera, and others. She has performed in many new works by composers John Adams, Jack Perla, Jake Heggie and William Bolcom. She has also been featured in the roles of Cherubino (Le nozze di Figaro), Hermia (A Midsummernight's Dream), Mercedes (Carmen), Girl (Grifellkin), Zerlina (Don Giovanni), Angelina or Cinderella(Cenerentola), and others. Along with an active performing career, Kristen has maintained a private studio for the past ten years in which many of her students have or are performing at professional theaters around the community. Many of her students also have excelled into college programs where they now major in Music and Voice. Along with teaching privately, Kristen has an active studio at Brassbell Music in Milwaukee.

Kristen has regularly taught movement for voice with Florentine Opera's Young Singer Actor Intensive and will be a part of the program this year where she will also be directing.