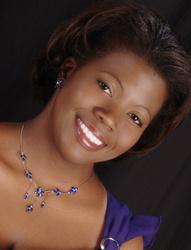 Bio: Bahamian-born soprano, Dara Rahming has been gracing the concert and operatic stage for twenty years. Highlights of her career include four seasons with the Lyric Opera of Chicago, two seasons with Opera Theatre of St. Louis and Sarasota Opera, the later in which the Sun Sentinal described her in the role of Medora in Verdi’s “Il Corsaro” as being “excellent” and later stated that “Rahming as Medora made one wish her part was larger. The young Bahamian soprano recalled Leontyne Price in looks as well as her sensual sound... Rahming was a poised presence, bringing out the melancholy yearning of her Act 1 Romanza with sensitivity.” After brilliantly performing both Tosca and Medora on the same day she was recognized by Sarasota Opera for being an Outstanding Returning Studio Artist and was awarded the Daniel R. Mandelker and Marlene N. Harris Fund Grant. She later reprised the role of Tosca with Summer Opera Theatre Company in D.C.; the Washington Post commented that “Rahming sang (the aria) ‘Vissi d'arte’ with hair-raising power." Another highlight in Ms Rahming’s career was when she performed the role of the 1st Lady in Mozart’s “Die Zauberflöte” with Florida Grand Opera. “Rahming, a most spectacular First Lady. Her voice, beautifully placed and produced, soared over the ensemble with class and great style. Brava!” In 2004, Rahming began performing with the New York-Harlem Production’s tour of the Gershwin’s “Porgy and Bess”, a chapter in her career which has literally taken her singing around the globe. For ten years she worked with this production company, performing leading and supporting roles in some of the greatest opera houses and theatres in the world including Bunkamura Orchestra Hall in Tokyo (Japan), Alte Oper in Frankfurt (Germany), Deutsche Oper am Rhein in Dusseldorf (Germany), Teatro Pèrez Galdós in Las Palmas (Spain), Teatro Massimo Bellini in Catania, Sicily (Italy), Semperoper in Dresden (Germany), Oper Leipzig (Germany), Komische Oper Berlin (Germany) and Nationaltheater Mannheim (Germany). In 2009 while performing in Sicily one of the local papers wrote “Dara Rahming, in the role of Clara, delights the audience with the celebrated (aria) ‘Summertime’”. After her performance of the same opera in the New Orleans Opera 2010 production, The Times Picayune described her as being simply “sublime”. After witnessing the devastation of Hurricane Katrina in the summer of 2005 Dara began a Benefit Recital Series designed to raise money for her alma mater, Xavier University located in the heart of New Orleans. For nine years, she proudly served her alma mater as Professor of Voice and Director of Opera Workshop. Ms. Rahming maintains a busy performing schedule and has added several new roles to her repertoire. The title role of William Grant Still’s opera, “Minette Fontaine” performed with OperaCreole, Minerva in Opera Louisiane’s adaption of Monteverdi’s “Ulysses”, Sylvie in Dan Shore’s opera “Freedom Ride” and the title role of Scott Joplin’s “Treemonisha” both with Orquesta Sinfònica de Minerìa the Louisiana Philharmonic Orchestra under the baton of Carlos Miguel Prieto. In March 2018, she will return to the Big Easy to sing Creole Songs arranged by Camille Nickerson again with the LPO in celebration of the City of New Orleans Tricentennial at the Saint Louis Cathedral.
Voice Type: Soprano
Music Styles Taught: Opera; Classical; Musical Theatre
Availability: I am available as a performer; I am currently accepting private students; I am available as a clinician or presenter; I offer lessons in a group environment; I accept students through a college or university program