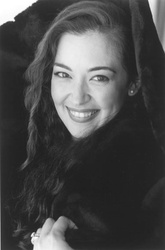 Julia Watkins-Davis has been praised for her "fiery coloratura" and "outstanding musicianship and gift of interpretation" as a classical performer. In the 2017-2018 Season, she performed Donna Anna in Don Giovanni with Texas Concert Opera Collective, and Clarice in Tony Solitro's "She's Fabulous" with One Ounce Opera’s “Fresh Squeezed Ounce of Opera 3”. ​

Julia Watkins-Davis was awarded the Grand Prize at the national finals of the Bel Canto Vocal Scholarship Foundation in 2002. She has been honored as a district winner of the Metropolitan Opera National Council Auditions, and recognized by the National Association of Teachers of Singing (NATS), the Young Musicians Foundation, the Palm Springs Opera Guild, the Loren L. Zachary Society and the Opera Buffs of Southern California.

Julia is a private voice instructor at her home studio and Lamar Middle School Fine Arts Academy in Austin, Texas. Please visit the website at www.juliawatkinsdavis.com for more information.