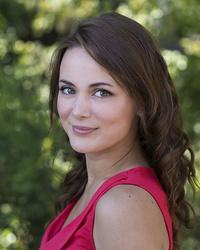 Title: Soprano, Voice Instructor
Bio: Catherine Kelly, soprano, is a native of North Carolina, USA. Upon the completion of her Master's degree in Vocal Performance & Opera, Catherine began an overseas performance career in Germany, where she appeared as the featured soprano soloist in the Mittelsächsisches Theater Chamber Music Series. She then relocated to Vienna, Austria, where she sang the role of Susanna in a 184-show run of Mozart's The Marriage of Figaro. During her time abroad, Catherine performed frequently in recitals and concerts, including the Palais Sommer music festival in Dresden, Germany, and she became a founding member of the chamber trio Ensemble Poetico. In addition to her performances in Germany and Austria, she has also made solo concert appearances in Ireland and England as well as in several U.S. states along the east coast. She has held leading roles in operas such as Gianni Schicchi (Lauretta), The Magic Flute (Pamina), The Diary of Anne Frank (Anne), and The Telephone (Lucy), as well as in musicals such as Pippin (Catherine), The Fantasticks (Louisa), and Grease (Sandy). Notable concert and oratorio solo appearances include Handel's Messiah, Mozart's Requiem, Rutter's Requiem, and Bach's Christ lag in Todesbanden. Catherine has taught voice and violin for a combined ten years, and she specializes in classical, opera, musical theatre, and 'popular' genres.
Voice Type: Soprano
Music Styles Taught: Pop; Opera; Jazz; Folk; Classical; Musical Theatre
Availability: I am available as a performer; I am currently accepting private students