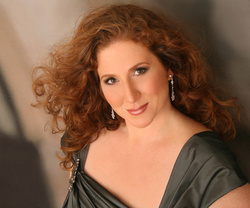 “Angelic” is the word most often used to describe the silvery, pure, sweet tone of Esther Heideman’s voice. A winner of the Metropolitan Opera National Council Auditions and the Lucia Albanese Competition, Esther Heideman continues to impress audiences around the world with her dynamic stage presence. Ms. Heideman has even been described as having Stradivarius vocal cords. Esther took her first voice lesson when she was 18 and already attending college. Her passion for performing emerged quickly, and she has dedicated her life to it ever since. In 2001, she made her Metropolitan Opera debut singing Pamina in Mozart’s Die Zauberflöte. That performance was immediately followed by her debut with the New York Philharmonic, and her European debut with the Prague Radio Symphony.

When not performing, Ms. Heideman enjoys teaching lessons and master classes and sharing her knowledge and experience with young performers. She currently runs a private voice studio in Washington, DC, where she works with students with a variety of musical backgrounds, and stylistic interests, including Classical/Opera, Choral, Musical Theater, Spirituals and Pop/Jazz.