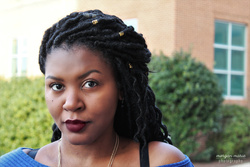 Senobia is originally from Columbus, Ohio. Her musical journey began with early education growing up singing and listening to music with family. Her interest took off when she began singing in her elementary school choir at eight years old. Senobia went on to perform in choir all through middle school and compete in a state recognized competitive singing high school choir. As a soloist and with the choir, Senobia has achieved many accolades for her talent.

Following high school, Senobia attended The Ohio State University, where her educational focus was on Musicology with an emphasis in Classical Voice Performance. Senobia's teaching experience began in college with her giving back to her community by offering voice lessons and voice coaching to her peers and local school-age children. Senobia was a member of several ensembles while at the University, including the African American Voices (AAV) Gospel Choir. During her time at the University, Senobia performed in many recitals, operas, and music festivals in addition to performances abroad in Vieri sul Mare, Italy. Senobia has also performed in numerous Black History month forums and events, offered through the University's Frank W. Hale Black Cultural center celebrating guest speakers including Dick Gregory, Bobby Steele, Nikki Giovanni, Ronald Martin, and Yolanda King daughter of Martin L. King Jr, to name a few.

In 2010, Senobia joined the U.S. Army and performed with the 4th Infantry Division Band in and around the Colorado Springs community for several years. She continued her teachings being a professional vocal coach to her fellow vocalist and incoming vocalist looking to audition for the band. Senobia would also work as a consultant on behalf of the 4th Infantry Division band screening incoming members for musical talent. While on active duty, Senobia had the opportunity to travel to Denver to perform at the Colorado Rapids stadium on "LIVE" National television. She also traveled to Estes Park, Colorado to be featured in the 36th annual Scottish- Irish International Tattoo, which included the Scottish Power Pipe Band from Fort Collins, Colorado, Lothian & Borders Police Pipe Band from Edinburgh, Scotland, The 4th Infantry Division Army Band from Fort Carson, Colorado, The U.S. Air Force Honor Guard Drill Team from Washington, DC, and the 1st Marine Division Band, from San Diego, CA.

After her time in the military, Senobia has gone on to continue expanding her brand and performing in local communities. She has been noted touring with the Mile High Jazz band in Colorado Springs, Colorado, performing with the Fairbanks Community Jazz Band, in Fairbanks, Alaska, and the Front Royal, Virginia based Yesterday Swing Orchestra. As well as, performing with the Shenandoah University Jazz Ensemble, and several jazz combos in Winchester, Virginia. She has recently finished a Master of Music studying Voice Pedagogy Contemporary Commercial Styles with an emphasis in Singing Health at the renowned Shenandoah University located in Winchester, Virginia.