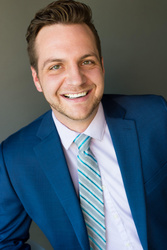 Will Perkins has been lauded by Opera News not only for his “sympathetic, forthright tenor,” but also for his ability to breathe life into the characters he portrays, “to emerge as the voice of reason.” A diverse performer, Dr. Perkins has enjoyed singing lead roles in opera, operetta, and musical theater. He is equally at home singing Mozart as he is performing barbershop or contemporary musicals. His love for varied repertoire was also the subject of his dissertation: Incorporating Musical Theater in the Classical Voice Studio, which explores the benefits of the integration of this important American art form in singers’ personal study for their artistic development as well as career sustainability in today’s market. During his time at Indiana University’s Jacobs School of Music, Will founded, produced, and directed The University Gilbert and Sullivan Society, which will celebrate its fifth season in the fall of 2018. This extracurricular organization provides performance opportunities for students from all disciplines. In addition to performing, participants are encouraged to design and build sets, costumes, props, and lighting, thus gaining a more thorough understanding of the complete production process. Additionally, Dr. Perkins has been sought after for his creative directing abilities at IU Opera Theater, Sylvia McNair’s Opera Workshop, and Brigham Young University. Will also finds great value in recital performance, and is interested in innovating the traditional programming format to include more meaningful and insightful set groupings. As a soloist, he has appeared recently with the Salt Lake Choral Artists in concert and recording, singing the tenor solo in Dan Forrest’s Lux: The Dawn From on High; with the Timpanogos Symphony Orchestra as the tenor soloist in Bach’s Christen, ätzet diesen Tag; and at the Salt Lake Tabernacle singing Peter in Rob Gardner’s oratorio, Lamb of God, under the direction of Dr. Jane Fjeldsted. Currently, he is Assistant Professor of voice and opera at Middle Tennessee State University in Murfreesboro, TN.

During graduate studies at Indiana University, Will was selected to sing leads in two world premiere operas, including Vincent by Bernard Rands, the recording of which can be found on the Naxos American Classics label. Additional engagements have included Utah Festival Opera and Ohio Light Opera. Favorite roles include the title role in Candide; Camille in The Merry Widow; Jinx in Forever Plaid; Dr. Madden in Next to Normal; and Laurie in Mark Adamo’s Little Women.

Voice Type: Tenor
Music Styles Taught: Pop; Opera; Classical; Musical Theatre
Availability: I am available as a performer; I am currently accepting private students; I am available as a clinician or presenter; I accept students through a college or university program