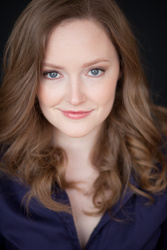 Jackie Grigg received her Bachelor of Music degree from the University of Colorado and her Master of Music and Advanced Certificate in Vocal Pedagogy from New York University. As a graduate student in New York, she taught private voice lessons and group voice classes to undergraduates at the university. Teachers and mentors include Jeremy Aye, Brian Gill, Dianna Heldman, Bill Wesbrooks, and Bonnie Draina.

While at NYU, she performed as Lynette “Squeaky” Fromme in Stephen Sondheim’s Assassins, and was featured in Massenet’s Cendrillon, as well as workshopping several new musicals. In 2015, Jackie was awarded a creative grant for an intensive study on Bock and Harnick’s musical She Loves Me, culminating in a performance in which she portrayed the role of Amalia Balash.

Before attending NYU, Jackie performed on the national tour of Foodplay! (Janey the Juggler). Regionally she has performed in productions of The Light in the Piazza (Clara), Irving Berlin's White Christmas (Judy), She Loves Me (Arpad), Cinderella (Cinderella), Fiddler on the Roof (Chava), The Sound of Music (Liesl), Into the Woods (Rapunzel), and The King and I (Little Eva).