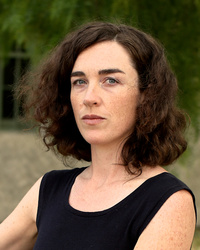 Meghann Welsh is a classically trained soprano whose creative work spans opera, country and blues, free improvisation, musical theater, and contemporary and baroque chamber music. She has shared the stage with Happy Traum and Jim Kweskin, jazz luminary Karl Berger, grammy winners Kamau Kenyata and Susan Narucki, composition visionary Lou Harrison, and many talented Bay Area and San Diego musicians and artists. As the singer and tenor banjo player with the award-winning old time group, G Burns Jug Band, she has toured the country and shared festivals with the likes of Dom Flemons of the Carolina Chocolate Drops and bluegrass great Del McCoury.

Meghann has had the honor of performing Boulez’s Improvisation sur Mallarmé with the Palimpsest Ensemble under the baton of Steven Schick, the role of Micäela in Bizet’s Carmen under the direction of Nicole Paiement and Brian Staufenbiel, Elmire in Kirk Meacham’s Tartuffe, Socrate in Erik Satie’s Socrate, and the soprano soloist in Haydn’s Lord Nelson Mass among others. She has worked with many talented new music composers to premier cutting edge vocal works in San Francisco and San Diego. In addition to her interest in new music and opera, Meghann has a deep love of baroque music which she fostered while working under the auspices of harpsichordist JungHae Kim and members of the Alexander String Quartet. She has also dabbled in theater as a composer, performer, and actor: in 2014 she was hired by The La Jolla Playhouse to create and perform music for Suzette Who Set To Sea, an original production in which she also acted. While working towards her doctorate in music at UC San Diego, Meghann taught voice lessons to undergraduate voice majors and minors and served as an associate instructor, designing and teaching the first serious course on karaoke – a class that critically explored identity and social rituals through voice and music. In addition, she has taught musicianship, group voice lessons, and music history as a teaching assistant at San Francisco Sate University and UC San Diego. Meghann earned her Bachelor of Music degree in Vocal Performance from the University of California, Santa Cruz (2002), her Master of Music degree in Vocal Performance from San Francisco State University (2009), and her Ph.D. in Music with an emphasis in Integrative Studies and Vocal Performance from the University of California, San Diego (ABD).