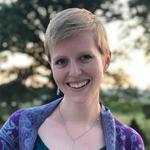 Bio: Soprano Jessica Huetteman has performed in Europe, the United States, and China. Active as a soloist and chorister, Jessica has performed under the batons of Yannick Nézet-Séguin, Pablo Heras-Casado, Simon Carrington, and Julian Wachner. During her residency at Spoleto Festival USA in May 2019, Jessica appeared as a soloist in Joby Talbot’s Path of Miracles with the renowned Westminster Choir. Originally from Rhode Island, Jessica received her Master of Music in Voice Performance and Pedagogy with distinction from Westminster Choir College of Rider University. During her time at Westminster, Jessica appeared on the stages of Carnegie Hall, Verizon Hall, the Forbidden City Concert Hall (Beijing), the National Centre for the Performing Arts (Beijing), and Charleston Gaillard Center. As a chorister with Westminster Symphonic Choir, Jessica performed in the world premiere of Tod Machover’s Philadelphia Voices with The Philadelphia Orchestra in both Philadelphia and New York City. Jessica also holds a Bachelor of Arts in Music and Psychology from UMass Amherst. In addition to singing, Jessica teaches voice lessons at the RI Philharmonic Music School in East Providence, RI and works as a church musician around the state.
Voice Type: Soprano
Music Styles Taught: Opera; Classical
Availability: I am available as a performer; I have a wait-list for private lessons