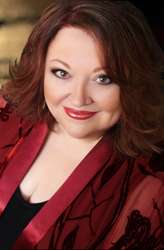 Title: Director of Vocal Studies for the Ryan Opera Center
Bio: Julia Faulkner has had a distinguished international singing career with performances on many of the world’s great opera and concert stages. She made her Metropolitan Opera debut in the title role of Strauss’ Arabella in 1994 and sang major roles for many years at the Bavarian and Vienna State Operas. She has been celebrated in the roles of the Marschallin, Arabella, Countess, Fiordilidgi, Ariadne, and Capriccio Gräfin to name a few. Other prestigious engagements have included performances with La Scala, Hamburg, Amsterdam, The Berlin Philharmonic, Cleveland Orchestra, Concertgebouw, Dresdener Staatskapelle, Gewandhaus Leipzig, and L.A. Philharmonic among others. A celebrated recording artist, Julia has recordings on the Naxos, EMI and Deutsche Gramophon labels. A recent Naxos release (2009) of Hoiby songs with the composer at the piano won particular critical praise in the press: ……Julia Faulkner’s sumptuously creamy voice is capable of delicate pianissimos, shimmering high climaxes and affecting phrasing ---Opera News Internationally renowned as a master teacher, Julia Faulkner is Director of Vocal Studies for the young artists of the Patrick G. and Shirley W. Ryan Opera Center at the Lyric Opera of Chicago and is on the faculty of the Curtis Institute. A former student of the legendary Margaret Harshaw, Julia has firmly established herself as one of the top voice teachers in the world. Julia has students singing world-wide at the Metropolitan, La Scala, Vienna State, Bavarian State and Chicago Lyric operas to name a few. Prior to her move to Chicago Julia was a Professor of voice at the University of Wisconsin-Madison for 10 years.
Voice Type: Soprano
Music Styles Taught: Opera; Classical
Availability: I have a wait-list for private lessons; I am available as a clinician or presenter