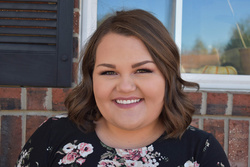 Cady Thomas, soprano, is originally from the Nixa, Missouri, area.  She earned her Master of Music in Vocal Performance and Vocal Pedagogy from Southern Illinois University Edwardsville where she studied with Dr. Marc Schapman and her B.M. in Vocal Performance from Truman State University. Cady has been the recipient of numerous awards for both her musicianship and scholarship, including 7 top awards at NATS competitions in the central region. Prior to being chosen as a winner of the SIUE Concerto and Aria competition in 2019, she was awarded the same honor in 2014 at Truman State University. She is an active soprano in the St. Louis area, most recently appearing as a featured soloist with Opera Edwardsville. Her operatic credits include Olympia in Pinocchio, Silverpeal in The Impresario, both the Mother and Amahl in Amahl and the Night Visitors, Gretel in Hansel and Gretel, and Billie in Speed Dating Tonight.

In addition to her private studio of piano and voice students, Cady services at the Director of Music at Our Lord's Lutheran Church in Maryville, IL, where she oversees traditional service music and conducts the Handbell, Adult, and Youth choirs.

Availability: I am available as a performer; I have a wait-list for private lessons; I am currently accepting private students