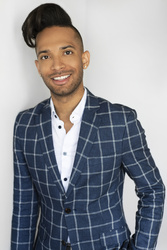 Darnell Brandon Thomas - A Canadian-born, with Trinidadian roots, is a vocalist and multi-instrumentalist known for his energetic, eclectic and emotionally capturing performances. His versatility to sing and play several genres including but not limited to Jazz, R&B, Soul, Funk, Pop, Rock, Classical and Latin, is one of the many reasons he is in high demand by many. He has received tutelage from some of the World's renowned vocal coaches like Falconer Abraham (vocal coach to many top Toronto artists like Melanie Fiona, Neverest and Aleesia), Lorraine Lawson (vocal coach to CTV's The Launch and many more) and Seth Riggs (vocal coach to some of the world's greatest vocalists like Michael Jackson, Prince, Barbra Streisand and Stevie Wonder). Darnell has also done musical work for hit TV Shows like Glee and Disney's Overruled! and worked with artists like Nelly Furtado and Fefe Dobson. He has produced, directed, written and performed in numerous musicals and songs featured in films and tv shows. Select music directorial credits include Little Shop of Horrors, Hairspray, Footloose, Beauty & The Beast, Urinetown, Enchanting and Mamma Mia. In 2008, he competed in the World Championships of Performing Arts, held in Hollywood, where he won four gold medals and won the Grand Champion of the World Title – Instrumental category playing the Steel Pan.

Darnell has arranged, produced and performed in several charitable concerts in collaboration with UNESCO (an arm of The United Nations) to raise funds for many charities. In 2009, he established the Keys to Dreams Foundation, which provides financial assistance through scholarships to performers. In 2015, Darnell was invited to audition for The Voice UK & X Factor UK. Darnell currently holds a Masters Degree in Vocal Performance & Ethnomusicology from York University and is a guest lecturer for the music department at York University. He also recently joined the Faculty of Animation, Arts and Design at Sheridan College as a professor in the musical theatre department. As an educator with extensive knowledge of performing arts pedagogy, he has also been involved in mentorship and curriculum and program development at many schools. He is also an active NATS member. He participates in education workshops in New York City, led by established Broadway directors, artists and performers. He has served on numerous arts and charity related boards.

In 2017, Darnell established GTA’s newest and highly sought-after corporate, wedding and special events band, D & The Groove Factory. He also co-founded a youthful vocal group, Vocalics, who has made waves in the GTA for their rich harmonies and vocal talents. Darnell materialized one of his artistic dreams becoming the co-founder and co-artistic director of Cue The Lights Productions, focused on shining the spotlight on established and up-and-coming professional singers, actors and dancers in both original and popular shows. In 2018, Darnell co-founded the TDM Creative Group which serves as the creative holding company for his artistic companies including his performing arts’ school, The Institute For The Performing Arts. He is also the Musical Director of the musical theatre program at The Avenue Roads Arts School in Toronto. Amid all this, he still finds the time and energy to give back to the community both local and international and meet the live music demand at several venues on a regular basis.

Voice Type: Tenor
Music Styles Taught: Pop; Opera; Jazz; Folk; Gospel; Rock; Classical; Musical Theatre
Availability: I am available as a performer; I have a wait-list for private lessons; I am currently accepting private students; I am available as a clinician or presenter; I offer lessons in a group environment; I accept students through a college or university program