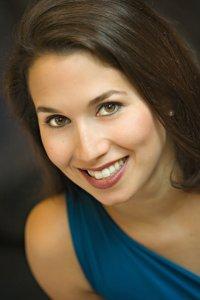 Bio: I enjoy teaching voice to students of all ages. It is most important to me that I instill healthy singing habits by focusing on breath development and management in the bel canto style, while allowing students to sing music that interests and suits their individual voices. Repertoire includes classical, Broadway, and rock/ pop. \n \nA singer is much more than a person who makes a pretty sound. A singer is a communicator, a musician, and what some would describe – a singing actor. It takes the complete package – talent, stage presence, drive and determination, and strong communication skills - for a performer to reach her audience. After all, the voice cannot be seen – only heard and felt. \n \nIn my studio, I use a range of tools and teaching aids to help students learn to “feel” their voices as “listening” to one’s sound for positive/negative feedback can yield misguided results depending on the acoustics of a given space. While instrumentalists can hold, tune, and even change models of their instruments, singers do not have that luxury as our bodies are our instruments. That said, I draw from many avenues of my own studies to help my students find their own voices. Specifically, I use practices from yoga and Gyrotonic/Gyrokinesis body work to help my students coordinate and engage the correct muscles for bel canto singing while releasing tension in the body that can impede communicative singing. Some students prefer and benefit from more anatomical explanations of what is happening inside their bodies, and with my pedagogical background, I am able to help describe what is physically happening within the body. Finally, imagery and actual recordings are also other helpful tools that I use to reach my students. I believe that there is no one way to reach a student. \n \nIt is my objective in a lesson to give each of my students the unique attention they deserve and to focus the lesson time on each of my students' strengths and weaknesses. \n \nI have had the pleasure of teaching students who have performed with the New Jersey All-State Choir, North Jersey Regional Choir, Papermill Playhouse Conservatory, New Jersey Honors Jazz Choir, Morris County Honors Choir, and the New Blue a cappella group of Yale Univerisity. Some of my students have gone on to matriculate at the following institutions: Yale University, American Univeristy, Muhlenberg College, Colgate University, Fordham University, and Skidmore College to name a few while other students have signed with professional management. Additionally, I also enjoy working with adult non-singers who simply want to work on vocal technique to improve their speaking voices when presenting information in the workplace. I feel that learning good vocal technique and breath support can only help to improve one’s speaking voice. \n \nWho am I? \nLaura Zupa D’Avella, soprano, a native of New Jersey has performed in numerous concerts, recitals, and operas throughout the New York Metropolitan area with several opera companies and organizations. Her most recent engagements include performances with Stony Hill Players, Ridge Light Opera, South Mountain Theater Works, OLCO International, the New Jersey State Opera, Coro Lirico, and Opera New Jersey. \nIn February 2011, Laura sang the role of Micaela in Carmen with Stony Hill Players under the baton of Jason Tramm. That previous September, Laura sang the roles of Adele in Die Flederamaus and Mabel in The Pirates of Penzance with Ridge Light Opera (RLO), the same company where she previously appeared as Frasquita and Rose Maybud in scenes from Carmen and Ruddigore. In July 2008, Laura debuted with RLO as Josephine in its production in the park of Gilbert & Sullivan’s HMS Pinafore, which she later reprised in a performance for the Gilbert & Sullivan Society in New York. \nIn 2007, Laura returned to New Jersey Opera Theater as a studio artist and sang the role of Papagena in Mozart’s Die Zauberflöte in preview concerts for the company’s SummerFest. She also sang Annina in Coro Lirico’s La Traviata and was the Novice in Empire Opera’s premiere season performances of Suor Angelica under the baton of Carmine Aufiero. Laura won the South Orange Symphony Orchestra 2006 Competition in the non-keyboard division and sang with Pacific Opera in New York, where she was featured in concerts as Violetta (La Traviata), Susanna (Le Nozze di Figaro), Gretel (Hansel and Gretel), and Gilda (Rigoletto). \nLaura made her professional debut in 2005 as Inez in Verdi’s Il Trovatore with New Jersey State Opera at NJPAC under the baton of her mentor, the late Maestro Alfredo Silipigni. She sang at the Memorial Concert for Maestro Silipigni in June 2006 (Joseph Colaneri conducting), and with the New Jersey Ballet in two programs commemorating New Jersey Ballet’s longtime association with Maestro Siglipini and the New Jersey State Opera. During the summer of 2005, Laura sang Barbarina in New Jersey Opera Theater’s Summer Vocal Institute production of Le Nozze di Figaro (Michael Recchiuti conducting). \n \nLaura received her Master’s Degree in Voice Performance and Pedagogy from Westminster Choir College, where she was featured in Westminster Opera Theater productions. In addition to her Master’s degree, Laura holds a BA in music from Barnard College of Columbia University. She currently studies with American soprano Amy Burton and has had the pleasure of working opera coaches Susan Woodruff Versage and Albert Stanziano. www.LauraVoice.com
Voice Type: Soprano
Music Styles Taught: Pop; Opera; Rock; Classical; Musical Theatre
Availability: I am available as a performer; I am currently accepting private students; I accept students through a college or university program