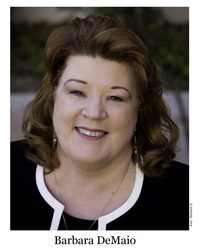 Title: Assoc. Prof. of Voice, University of Central Oklahoma
Bio: The American Soprano Barbara Fox DeMaio, has a deserved international fame. Her vast repertoire includes all the great roles of a Puccini and Verdi soprano, performed in theatres in Italy, Swizerland, Germany and France; Tosca, Lady Macbeth, Turandot, Aida, Abigaille in Nabucco, and also Amelia in Ballo in Maschera, Elvira in Ernani, Lucrezia in I Due Foscari, Leonora in La Forza del Destino and Odabella in La Scala's Attila directed by Riccardo Muti. She is also a noted interpreter of Norma, the Bellini heroine. Since returning to the United States she has added new shows to her repertoire; Bolcom’s Medea and Hoiby’s Bon Appetit! as well as the Witch in Humperdinck’s Hansel and Gretel , Domina in Forum, Mama Rose in Gypsy, Grandma Helene in Freaky Friday, Ida Strauss in Titanic, Berta in Il Barbiere di Siviglia and Costanza in the play Enchanted April. DeMaio is currently an Assoc. Prof. of Voice at the University of Central Oklahoma, teaching both Opera and Musical Theatre styles, Executive Director of Painted Sky Opera and a Level III Somatic Voicework© teacher. In October, 2016, she was honored to be named as a Member Laureate by Sigma Alpha Iota. Her DMA Vocal pedagogy degree at Shenandoah University included dissertation research on the effect of menopause on the elite singing voice that she has since presented in the form of workshops and presentations across the US, at La Voce Artistica in Ravenna, Italy and at The Voice Geek Conference in Colchester, England.
Voice Type: Soprano
Music Styles Taught: Pop; Opera; Folk; Classical; Musical Theatre
Availability: I am available as a performer; I am currently accepting private students; I am available as a clinician or presenter; I accept students through a college or university program