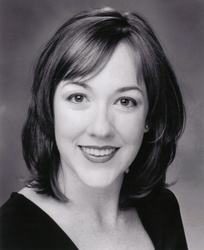 Mezzo-soprano Kendra Herrington has earned critical acclaim on national and international opera stages. She holds a Bachelor of Music in Voice Performance from the University of Oklahoma and a Masters of Music in Voice performance from the Moores School of Music at the University of Houston. Following her university studies, Ms. Herrington spent two seasons with the Fort Worth Opera Studio and two seasons with the Portland Opera Studio. Other engagements include the Chautauqua Opera, Des Moines Metro Opera, San Antonio Opera, Tulsa Opera, and Opera in the Ozarks. Her mainstage credits include Jo March in Little Women, Dido in Dido in Aeneas, Lucretia in The Rape of Lucretia, Penelope in The Return of Ulysses, Siebel in Faust, and the Muse / Niklaus in The Tales of Hoffmann. In addition, Ms. Herrington has been a featured soloist with the Chautauqua Symphony Orchestra, the Bravo! Vancouver Series orchestra, the Opera America New Works Sampler, and the AIMS Festival Orchestra touring Austria in a concert production of Der Rosenkavalier.

In 2007, Kendra and her husband Mark settled in McKinney where she began a voice studio. Her students have consistently earned top prizes at the TMTA State Voice Competition, earned chairs in the Texas All-State Choir and performed on the MISD Vocal Honors Recital. Her students have also received national recognition from the Young Arts Foundation, the Classical Singer Competition and the MTNA National Voice Competition. Former students are now attending elite university and conservatory programs, such as the Cincinnati Conservatory of Music, San Francisco Conservatory, and the Berklee School of Music in Boston with music scholarships. In 2017, Mrs. Herrington was honored to be nominated by the Plano Music Teachers Association as the Outstanding Pre-Collegiate Teacher of the Year for the state of Texas.