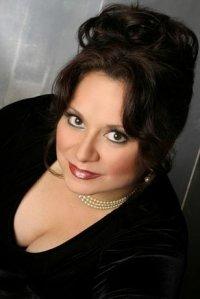 She regularly performs at music festivals around the world and USA, participating in the Verbier Music Festival (Switzerland), in Israel with the Israel Philharmonic, Zubin Mehta conductor, the Lincoln Center Summer Festival, “Summerscape” at Bard College, the Bard Music Festival and the Carmel Bach Festival.

Upon completion of her undergraduate studies at Arizona State University, she joined the Merola Opera Program at San Francisco Opera and later earned her Master of Music degree from The Juilliard School in Voice and Opera Performance. She was a National Finalist in the Metropolitan Opera National Council Auditions and took First Place in competitions sponsored by the San Francisco Opera Center, the Music Teachers National Association and the National Association of the Teachers of Singing. In 1989 she was given the “Young Alumni Achievement Award” by her alma mater, Arizona State University. Recordings include “Of Bondage and Freedom” with North/South Consonance, The Music of John Anthony Lennon with Continuum for Composers Recordings, Inc., The Music of Samuel Zyman for Warner Brothers, “Ritmo Jondo - Music of Carlos Suriñach” with Pablo Zinger, piano, for New World Records, and “El mensajero de Plata,” an opera, by Roberto Sierra with the Bronx Arts Ensemble. She currently a member of the teaching faculty Vassar College and maintains a private teaching studio in NYC.