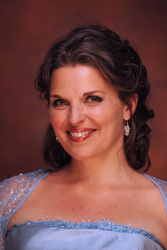 Title: private voice teacher/professional singer
Bio: As a young singer in high school and community college, I defined vocal excellence in terms of musicality and versatility of style. Long before "eclectic" was commonly used to described musical preference, I passionately pursued that experience in my music making. I hopped from opera to musical theater to singing in bars, improvising jazz and writing pop tunes I accompanied on piano. At the University of Minnesota in the late 80's and into my career, I narrowed my professional focus solely on the classical repertoire. The history, theory and technique a classical education afforded was foundational to me as a professional. And it truly was a thrill and privilege to solo with many major American symphonies, and orchestras abroad; as well as sing with top international conductors and soloists, perform at Early Music festivals, plan recital tours and premiere new works. I had the great opportunity to record twice with Boston Baroque (both nominated for Grammies) and solo with Philadelphia Orchestra at Carnegie Hall. I sang many times with Baltimore Symphony Orchestra, one series Bobby McFerrin conducted; with a final performance at Kennedy Center. It was in those blended performances of Bach and nightly improv that my desire for eclecticism was reignited. I began adding non-classical performances into my concert schedule; with a blues performer, electronic pop band, trio, rock band. As cross-over started to become more acceptable, I was delighted to find support as I incorporated a variety of musical styles into a single performance. My private voice studio has always been a place where a variety of voices, styles and experiences have found a safe haven. I gratefully draw from a pedagogy developed through years with classical music, and also rely on the love of versatility that's always been a part of me. Both continue to be a great source of delight and inspiration, as I help guide other singers on their unique, individual paths.
Voice Type: Soprano
Music Styles Taught: World; Pop; Opera; Jazz; Folk; Gospel; Rock; Classical; Musical Theatre
Availability: I am available as a performer; I am currently accepting private students