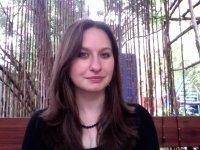 Bio: Angela Irving graduated from the University of North Texas in 2004 with a Bachelors degree in Vocal Performance, having studied with Laurel Miller. She started teaching voice lessons right after graduating, particularly focusing on teaching high school students, but she also teaches middle school students and adults. Ms. Irving performs roles with the Gilbert & Sullivan Society of Austin, is a regular performer with One Ounce Opera, performs with the jazz quartet group Tinsel Singers, performs with the Inversion Ensemble which specializes in brand new choral music, has sung with the Austin Opera Chorus for many years, has been singing in a live remote choir based out of NYC called C4 Goes Remote during the coronavirus pandemic, and has also been making many recordings to continue participation with the groups she usually sings with in person. Ms. Irving has performed with Opera Outreach Programs SMART Opera and Opera Pals, has sung leads in musicals, including musical theatre pieces and chamber music that have been specifically written with her voice in mind, has dabbled in world music, has sung in a few bands, even back-ups in a funk cover band at one time! Even though her pedagogy background is in classical technique, she welcomes all styles of singing in her studio. Her main teaching goal is to help singing be as fun, healthy, and fulfilling as possible, whatever style it may be. Ms. Irving enjoys being a lifetime learner, therefore there is no style of singing she won't try to learn about, help with, or do herself! Many of Ms. Irving's students have made 1’s at UIL Solo & Ensemble, District and State-levels, some of whom have been awarded Outstanding Performer at State. Many students have made All-Region Choir, 21 of whom have made the Texas All-State Choir. Most of the students she takes to the NATS Vocal Competition place in at least the Semi-Finals, about a 3rd have placed in the Finals, and a good number have won in their division. Many of her students have been awarded solos for their choir concerts, have sung leads in musicals, have performed on their own in various venues, even including Carnegie Hall. Her students have performed with the following organizations: Zilker Summer Musicals, Summer Stock Austin, Austin Opera Chorus, TPSMEA All-State Choir, Gilbert & Sullivan Society of Austin, Brevard Music Center Institute, Interlochen Summer Arts, Boston Conservatory Summer Program, Spotlight on Opera, Select Ensemble at the Long Center, Pre-Professional Company at Zach Scott, TexArts, KidsActing, Texas A&M Singing Cadets, Tapestry Singers, OAKE National Choir, the Vortex, and various community theatres. She's also helped a good number of students prepare for music college auditions and get accepted to music programs at schools such as Belmont, Molloy Cap 21, Interlochen, Berklee, Rice, San Francisco Conservatory, Boston University, Syracuse University, University of Houston, University of North Texas, Oklahoma City University, Ithaca University, University of Toronto, University of Kansas City Missouri, Cornish College of the Arts, Wright State, Baylor, Sam Houston State, Texas State University, University of Texas San Antonio, Texas Lutheran University, University of Texas, Southwestern University, St. Edwards University, and AMDA, among others.

Availability: I am available as a performer