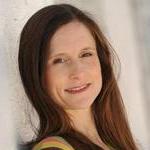 Title: Faculty U. Mass. Boston
Bio: Soprano Jessica Cooper is a San Diego native who was hailed as "a welcome addition to Boston's top rank of Handel sopranos," in her Boston solo debut.  Praised by critics for a voice characterized by an earthy, core warmth capable of  fiery agility and precision, Jessica's expressive performances have made her a favorite among  Boston audiences. Ms Cooper makes regular appearances in top New England groups as both soloist and chamber artist.   Performing repertoire ranging from Renaissance and Baroque to Classical and New Music,  critics have called Jessica "wistful and melodious" in Purcell, as capable of "fiendishly difficult celebratory coloratura" in Handel, and of possessing "emotional intensity backed by technical security" in the modern music of John Harbison.  Ms Cooper has appeared as a soloist with  the Handel and Haydn Society, the Boston Cecilia,  Emmanuel Music,  Newton, Wellesley, and Nashua Symphonies, La Jolla Symphony and chorus, Portland Symphony and Chorus, Boston Civic Symphony Orchestra, live in recital on 89.7 WGBH radio and in numerous recital series in Boston, New England and abroad. Jessica was a finalist in the New England Regional Metropolitan National Council for Auditions for two years in a row, and was a  first place winner of the National Association of the Teachers of Singing National Competition. Jessica is lecturer at the University of Massachusetts, Boston, where she has taught applied voice since 2006, and Musical Theater History since 2010. She is also the Artistic Director of “The Henry Purcell Society,” a 501 (C) (3) organization dedicated to performing the works of Henry Purcell. Please visit www.BostonPurcell.org for more information!
Voice Type: Soprano
Music Styles Taught: Pop; Opera; Jazz; Folk; Classical; Musical Theatre
Availability: I am available as a performer; I am currently accepting private students; I accept students through a college or university program