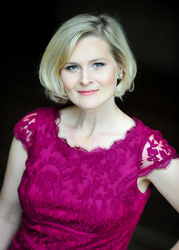 A diverse professional singer and actor, she has performed across the country in opera and theater. She is thrilled to bring the new work of music-theatre called “Sister—Show me Eternity” to Minnesota! The work premiered in upstate New York, then toured to Nebraska, and will continue touring. Regional opera credits include the Des Moines Metro Opera, Shreveport Opera, Opera Omaha, Union Avenue Opera, Kentucky Opera, Lake George Opera, and the Lyric Opera of Kansas City. Selected roles include Lisa in Pikovaya Dama, Tatiana in Eugene Onegin, Manon in Manon Lescaut, Nedda in I Pagliacci and Marguerite in Faust. She has performed various chamber works including Resphigi’s Il Tramonto in Italy with Orvieto Musica, as well as contemporary classical with the NewEar Ensemble, and early music with the Spencer Consort. She most recently was the soprano soloist in the “Dona Nobis Pacem” by Ralph Vaughan Williams with the Battenkill Chorale, and in Beethoven’s “Mass in C” with the Skidmore Chorus, and “Knoxville: Summer of 1915” with the Skidmore Orchestra. She was a featured recitalist this summer at the Sembrich Museum in Bolton Landing, NY and at the Bennington Center for the Arts.

She was a regional winner of the National Council Auditions for the Metropolitan Opera, and a finalist in the Marcella Sembrich competition, the Naftzger and NATS competitions. Acting credits include the national tour of Terence McNally’s MARIA CALLAS: MASTERCLASS, as well as productions with the Kansas City Repertory Theater, the New Theatre, the Metropolitan Ensemble Theatre, Starlight Theater, and Quality Hill Playhouse.

She obtained her Doctorate of Musical Arts Degree with honors in vocal performance at the University of Kansas and is currently the Artist-in-Residence in Voice at Skidmore College.