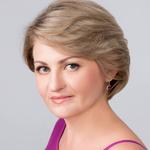 Ukrainian-born soprano Alina Ilchuk has performed throughout Europe, the United States and Canada. Her professional debut took place in Ukraine in 1995. She has recently appeared as a principal artist with the Sacramento Opera, the Reno Baroque Ensemble, the Bay Area Classical Harmonies, Slavic Chorale, and sung the role of Donna Anna in Don Giovanni at Sacramento State University. She had the privilege of singing the American premiere of Magnificat written by the Slovak composer Vladimir Godár. In 2020, Ms. Ilchuk will appear as a guest artist at the 20/20 Series Salon Concerts that complement the SF Symphony’s programming with Peter Grünberg at the piano. For many years Ms. Ilchuk has been an active participant with the LIEDER ALIVE! program in San Francisco where she has participated in master workshops with such renowned artists as the legendary soprano June Anderson, and master coaches Jeff Cohen and John Parr. She will perform at the program’s 10th Anniversary Liederabent Series 2020/21 with Tchaikovsky and Rachmaninov settings of Goethe and Heine.

She has been teaching voice since 1995. Some of her students are graduates of San Francisco Opera’s Merola Program and have won vocal competitions, including the Mondavi Center Young Artists Competition, the Classical Singer’s Vocal Competition, the Asya Pleskach Scholarship for Young Choral Singers, the ARC Concerto and Aria Competition, and the NATS Auditions. Ms. Ilchuk is a volunteer and passionate advocate for education and arts. For the last several years she has performed at fundraising events for the American - Ukrainian Catholic Education Foundation to benefit the Ukrainian Catholic University, which is the top 5 research universities in her native Ukraine. Along with her husband, she also supports San Francisco Charity Foundation “Anhelyk”. All collected funds go to war-orphan children who lost their parents defending Ukraine on its East borders. Ms. Ilchuk received her Master of Music degrees in Voice Performance from Lviv State Music Academy (Ukraine) and California State University, Sacramento, and is a member of the National Association of Teachers of Singing and the prestigious music honor society Pi Kappa Lambda.

Voice Type: Soprano
Music Styles Taught: Pop; Opera; Jazz; Folk; Classical; Musical Theatre
Availability: I am available as a performer; I have a wait-list for private lessons; I am currently accepting private students; I offer lessons in a group environment