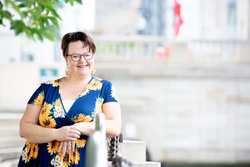 A native of Milwaukee, Jennifer Conrad-Proulx opened the Vocal Studio in 2001 and has since served on the voice faculty at the Community Music School in Buffalo, NY and the All Newton Music School IN Newton, MA before returning to Milwaukee in 2013 to open an independent studio. Her students have been seen on tour with folk legend Joan Baez and opening for artists such as The Indigo Girls and Rusted Root. Studio alumni have also been seen Off-Broadway and on National Broadway Tours. Additionally, students have placed in statewide NATS auditions, performed in state and honors choirs, and have been accepted into performance groups such as the First Stage Theater (Milwaukee, WI), Milwaukee Children's Choir (Milwaukee, WI), Boston Children's Theater (Boston, MA) and Boston Children's Chorus (Boston, MA). Alumni of the studio have continued their studies in colleges across the United States, including but not limited to: the New York Conservatory of Dramatic Arts, New York University's Tisch School of the Arts, SUNY Purchase, and Georgetown University.

Through NATS, Jennifer was one of fourteen national award winners of the 2016 Joan Frey Boytim Award for Independent Teachers. In 2020, she also joined the Speakeasy Cooperative. Jennifer remains an active adjudicator for NATS and WSMA.