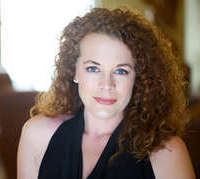 Soprano Elizabeth Ducey Moss is an experienced voice teacher with over fifteen years of teaching experience. She is a member of the voice faculty at Webster University and Missouri Baptist University in St. Louis. Elizabeth also runs a successful private studio in Ballwin, Missouri. Elizabeth holds a Doctor of Musical Arts degree in vocal performance from the University of Illinois, a Master of Music degree from Binghamton University, and a Bachelor of Arts degree in music from Acadia University. Prior to joining the faculty at MBU, Elizabeth served as Assistant Professor of Voice at McMurry University in Texas. Elizabeth received extensive training in the Tri-Cities Opera Resident Artist Program and remains active as a performer of opera, oratorio, musical theater, and recital. Performance credits include leading roles in The Magic Flute, Così Fan Tutte, Don Giovanni, Les Contes d’Hoffmann, Hänsel und Gretel, The King and I, Amahl and the Night Visitors, Beethoven’s Missa Solemnis, Brahm’s Requiem, Mendelssohn’s Elijah, and Mozart’s Requiem. She has been a featured artist presenter in the Heavenly Rest Chamber Music Concert Series, the Rocky Mountain Region College Music Society Conference, and in the Artist Series of the Texoma Region National Association of Teachers of Singing Conference. Elizabeth has been a national semi-finalist in the NATSA Competition, the Louis Alba Aria Competition, and a finalist in the American Prize in Voice. She performs regularly with the Saint Louis Symphony Chorus and continually seeks to expand and diversify her repertoire by performing a variety of programs from new music to chamber and oratorio works. Elizabeth is a member of the National Association of Teachers of Singing, and an honorary member of Sigma Alpha Iota International Music Fraternity.

Voice Type: Soprano
Music Styles Taught: Pop; Opera; Classical; Musical Theatre
Availability: I am available as a performer; I am currently accepting private students; I am available as a clinician or presenter; I offer lessons in a group environment; I accept students through a college or university program