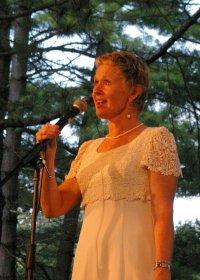 She has performed with the Canadian Opera Company Chorus, the Toronto Mendelssohn Choir and the Opera in Concert Chorus. She has performed at music festivals in Brussels, Flanders, Edinburgh and at Royal Albert Hall. An active performer, Linda sings many styles and genres, including classical music and musical theatre and has performed in many York Region venues such as Newmarket Theatre and The Briars. Recent performances include the mezzo soprano solos in the Mozart Requiem, Haydn’s Paukenmesse, Lord Nelson Mass and Mendelssohn’s Hymn of Praise, with conductor William Shookoff. She also performed scenes from Les Miserables with the Kindred Spirits Orchestra in 2013. She has performed in many musicals such as Oklahoma, South Pacific and You’re a Good Man Charlie Brown. She has also been fortunate to perform in world premieres of works by Canadian composers Scott Wilkinson, Clarke Ross and James Rolfe. Linda is a member of the National Association of Teachers of Singing (Ontario District Governor) and the Newmarket chapter of the Ontario Registered Music Teachers Association (Treasurer). She is Past President of Visual and Performing Arts Newmarket and is a member of the Newmarket Arts Council.

Linda maintains a busy voice studio where she prepares singers of all ages for festivals, exams (RCM and Conservatory Canada) and auditions. She is in demand as a workshop presenter, clinician and masterclass teacher. She is a regular adjudicator, having recently adjudicated music festivals in Peel, Uxbridge and throughout York Region for Music Alive