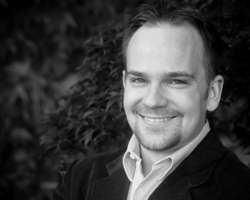 Evan Thomas Jones, baritone, has sung a wide variety of roles in opera, most notably both Mozart and Rossini's Figaro, Papageno in Die Zauberflöte, Raimbaud in Le Comte Ory and Sam in Trouble in Tahiti. In addition to an active opera career, Mr. Jones has portrayed a number of roles in musical theater and operetta. Highlights include the roles of Voltaire and Pangloss in Candide, Dr. Falke in Die Fledermaus, Danilo Danilovich in The Merry Widow, and Fredrik Egerman in A Little Night Music. In concert he has been featured as the baritone soloist in Fauré's Requiem, Beethoven's Missa Solemnis, Bach's Magnificat and John Rutter's Mass for the Children. He is particularly in demand as an interpreter of the concert repertoire of Ralph Vaughn Williams' having performed the Five Mystical Songs, Serenade to Music, Dona Nobis Pacem and Fantasia On Christmas Carols. Mr. Jones has sung with the Berkshire Opera Company, Compañía Lírica Nacional de Costa Rica, Mercury Opera, Opera Memphis, Opera Naples, Rochester Philharmonic Orchestra, Finger Lakes Choral Festival and the Augusta Choral Society.

Mr. Jones is also active in the performance of new works. In 2009, the Buffalo Philharmonic Orchestra and Chorus released the world premiere recording of Randol Bass' Passage Into Spirit on which Mr. Jones was the featured soloist. In the fall of 2010, Mr. Jones created the role of Roger Clinton in the world premiere performance of a new opera entitled Billy Blythe in Little Rock Arkansas. He will be reprising the role in the premiere recording which will be released in the spring 2012.

The 2012-2013 season will feature return engagements with Opera Memphis as Junius in The Rape of Lucretia and with the Memphis Masterworks Chorale as the baritone soloist in Brahms Requiem. In February, Mr. Jones will return to Tallahassee, Florida as the baritone soloist for the world premiere performance of Ernő Dohnányi's Orchesterlieder with the Florida State Symphony, he will also record the work on the Naxos label.

Mr. Jones received his Bachelor and Master's in Vocal Performance from Florida State University and is currently finishing his Doctorate in Vocal Performance and Literature at the Eastman School of Music. While at Eastman he was rewarded for excellence in both performing and teaching by winning first place in the Friends of Eastman Opera Competition and by becoming the first recipient of the William McIver Memorial Award in teaching. Prof. Jones's diverse group of current and former students have won awards at the Metropolitan Opera Nationals Council Auditions, National Association of Teachers of Singing competitions and have appeared on the stages of major opera houses, national equity tours and Broadway as well as television and film. He currently serves as Assistant Professor of Voice at the College of Music at Florida State University.

Voice Type: Baritone
Music Styles Taught: Pop; Opera; Classical; Musical Theatre
Availability: I am available as a performer; I am currently accepting private students; I am available as a clinician or presenter; I accept students through a college or university program