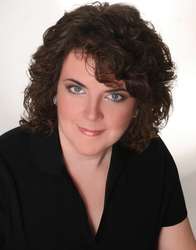 Acclaimed in the German press for her “phenomenal coloratura-technique and superior high register”, soprano Valerie Bernhardt’s voice has also been praised for her “molten mezzo quality and lovely high range” by the Washington Post.

Ms. Bernhardt’s 2014-2015 season will see her join the Lyric Opera of Chicago where she will cover the role of Elisabeth for its upcoming production of Tannhäuser. During the 2013-14 season, she reprised the role of Abigaille in Verdi’s Nabucco with ArtsNaples World Festival/Opera Naples, sang the title role in Carlisle Floyd’s Susannah with Coro Lirico in Morristown, NJ, and was the soprano soloist in Bruckner’s Te Deum with the New Jersey Symphony at the Cathedral Basilica of the Sacred Heart in Newark NJ. During the 2012-2013 season, she made her debut with Anchorage Opera in the World Premiere of Victoria Bond’s opera, Mrs. President. She portrayed the title role of Victoria Woodhull, the first woman to run for the U.S. Presidency in 1872. Valerie also sang the role of Brünnhilde in Die Walküre in concert with New York Lyric Opera Theater. Ms. Bernhardt has earned two graduate degrees in voice from The Juilliard School, and has trained at the opera programs at Chautauqua, Aspen, The Pittsburgh Opera Center, and the Daniel Ferro Vocal Program. Valerie was a participant in the Wagner Emerging Singers Program founded by the late Evelyn Lear and Thomas Stewart under the auspices of the Wagner Society of Washington, DC.