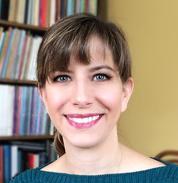 Comfortable as both a leader and collaborator, Laryssa Doohovskoy is a sought-after soloist and ensemble member. Gathering inspiration from experience as a performer both in the United States and abroad, she enjoys dissecting a wide variety of repertoire including art song, opera, musical theatre, as well as chamber and choral music.

Ms. Doohovskoy has performed staged works both in the US and abroad. Roles include Cherubino in Mozart’s Le Nozze di Figaro, Pitti Sing in Gilbert and Sullivan’s The Mikado, Dritte Dame in Mozart’s Die Zauberflöte, Arsace in Rossini’s Semiramide, Alisa in Donizetti’s Lucia di Lammermoor, Augusta in Douglas Moore’s The Ballad of Baby Doe, Prince Orlofsky in Johann Strauss’ Die Fledermaus, and Nicklausse in Offenbach’s Les Contes d'Hoffmann. Recent solo performances have included Bach’s Christmas Oratorio and Grechaninov’s Hvalite Boga with the Stow Festival Chorus and Orchestra, Vivaldi Gloria with Church by the Sea in Bal Harbour, Florida, several appearances with the Boston Russian Chorus and the Rachmaninoff Festival Chorus, and in chamber music concerts with members of the New World Symphony in Miami Beach. Ms. Doohovskoy has performed under the baton of many notable conductors including Wolfgang Sawallisch, Ricardo Muti, Sean Deibler, David Hayes, Christopher Hogworth, Tamara Brooks, and Jo-Michael Scheibe. She is a frequent chamber music collaborator in the Greater Boston area, performing classical, musical theatre, and new music programs.

Ms. Doohovskoy performed with members of Gloriae Dei Cantores, St. Romanos Cappella, and Washington Master Chorale under the direction of Peter Jermihov in the recently released recording of the Rachmaninoff All-Night Vigil. The recording has received critical acclaim since its release in January 2017. In 2013, Ms. Doohovskoy became a founding member of the Patriarch Tikhon Choir under the direction of Vladimir Gorbik. The New York Times heralded the choir with, “Beautifully blended…a sumptuous sound.” In December of 2014, she worked with the Patriarch Tikhon Choir on the CD Praise the Lord All Ye Nations. In September of 2015, Ms. Doohovskoy was invited to participate in a first of its kind masterclass in Moscow, Russia. The week-long class concluded with singing the services of Vigil and Liturgy with members of the Moscow Representation Church of the Holy Trinity-St. Sergius Lavra choir. In September of 2017, as a member of the PaTRAM Singers, she sang in the premiere of Kurt Sander's Divine Liturgy at the Alexander Nevsky Cathedral in Howell, NJ.

In 2014, she was invited to record Full of Grace: Great Vespers for the Feast of the Dormition of the Theotokos, with members of the St. Vladimir's Seminary Chorale, under the direction of Robin Freeman.

A passionate educator and choral director, Laryssa Doohovskoy has over 15 years of experience as a teacher of both children and adults. She runs a thriving private studio in Acton, MA, teaches voice at the Middlesex School in Concord, MA, is on the faculty of the Instrumental Music School of Carlisle and Concord (IMSCC) and the Patriarch Tikhon Russian American Music Institute (PaTRAM). She is a member of the National Association of Teachers of Singing (NATS). In 2018, Ms. Doohovskoy joined the faculty of the Summer School of Liturgical Music in Jordanville, NY. She also served as lead vocal instructor for the PaTRAM Institute's Summer Academy for Conductors and Singers. She has been invited to give several masterclasses in the Greater Boston area and along the east coast and has served as an adjudicator for local and national competitions. Her students have successfully auditioned for amateur and professional productions, district festivals, university music, and conservatory programs. She has served as music director for several children’s theater companies in the Greater Boston area including Encore Players and the Popcorn Players. In 2012, Ms. Doohovskoy was appointed Music Director of the St. Xenia Orthodox Church in Methuen, MA, after having served as Associate Director since 2004, where she leads both the adult and children’s choirs.

A longtime resident of the Northeast, Ms. Doohovskoy earned her undergraduate degree from New England Conservatory (BM, Vocal Performance). She continued her studies in South Florida, earning a graduate degree from the University of Miami Frost School of Music (MM, Vocal Performance). While at UM, Ms. Doohovskoy was awarded a Teaching Assistantship and the Provost Scholarship for study in Salzburg, Austria. Her principal teachers include Esther Jane Hardenbergh, Mark Pearson, Simeon Tregubov, and Susan Clickner.