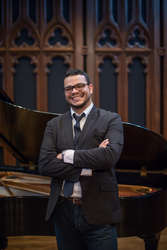 Dr. Sepúlveda holds a Bachelor of Music degree (B.M.) from the Conservatory of Music of Puerto Rico, a Master of Music degree (M.M.) and the Doctor of Musical Arts degree (D.M.A.) with a cognate in Vocal Health and Science from the University of Illinois at Urbana-Champaign. He is a graduate from the Summer Vocology Institute at the National Center for Voice and Speech at the University of Utah, and completed Level One of "Somatic Voicework™ The LoVetri Method," and Estill Voice Training® course: Level 1 Figures for Voice Control. The baritone was the recipient of the UIUC Stotler Fellowship Award, the Grace Elizabeth Wilson Award for Excellence in Singing, and the Joseph W. Schlanger Memorial Opera Scholarship.

While completing studies in his native Puerto Rico, Dr. Sepúlveda was active in the theatre scene. Most notable were his roles in plays by Federico García Lorca and Myrna Casas at the Luis A. Ferré Performing Arts Center. A lover of concert repertoire and choral literature, he is a former member of the Orfeón San Juan Bautista and was part of its first commercial recording "Puerto Rico a Capella" (2001), and “Yale Institute of Sacred Music: Orfeón San Juan Bautista” (2002). He was also featured in “In a Vale of Tears” (2012) by Tudor Voices (First Step Records, Millikin University).

The baritone joined the community of Western Illinois University as an Assistant Professor of Voice and Opera in 2017, after seven years in the faculty of Millikin University. Stage direction credits include The Old Maid and the Thief (Menotti), The Impresario, Bastien and Bastienna, and Le nozze di Figaro (Mozart), and Hansel and Gretel (Humperdinck). He is a proud member of the Voice Foundation, National Association of Teachers of Singing, National Opera Association, and the Pan-American Vocology Association.