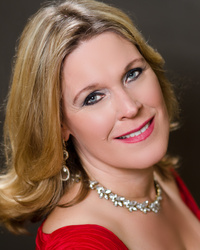 Bio: Lisa Willson DeNolfo, internationally acclaimed soprano, has been praised for her vocal beauty and purity of tone. She has sung leading roles in opera houses and concert halls throughout the world. In recent years, Lisa has performed with many of Philadelphia’s celebrated composers and conductors. She has sung selections from Wagner’s Die Walküre and Die Götterdammerung including Brünnhilde’s Immolation scene with The Lower Merion Symphony in which she will return as the soprano soloist in in Beethoven’s Ninth Symphony in June, 2020. In addition, Lisa performed Richard Strauss’ Four Last Songs with the Landsdowne Symphony under the baton of Reuben Blundell. She has participated in the renowned Andrea Clearfield salons in Philadelphia in collaboration with Israeli pianist/ cellist, Michal Schmidt. Most recently, she performed Ms. Clearfield’s “Revenge” aria from her Opera MILA and Rossini’s one-note comic aria, “Adieux à la vie.” At Ms. Clearfield’s 30th Anniversary Salon she sang selections from her composition, Women of Valor and The Rim of Love. In addition, she and Ms. Schmidt have performed together at the Philadelphia Ethical Society performing works of Clearfield and other celebrated Philadelphia composers. She performed the world premiere of Liam Wade’s song cycle, Love in the Time of Email (2015) at the Academy of Vocal Arts. Currently, she is the featured singer and interpreter of a collection of Yiddish art songs, written by David Botwinik, From Holocaust to Life, (iTunes and CD Baby). She has performed these songs at Haverford College, The Segal Performing Arts Center in Montréal and at the Yivo Institute for Jewish Research in New York City. In addition, Lisa has been featured in Philadelphia’s Lyric Fest concerts, Around the World in 80 Minutes and Myth and Muse. Lisa was the soprano soloist in Verdi’s Requiem Mass, entitled The Defiant Requiem, with the Oregon Symphony Orchestra under Maestro Murray Sidlin, which was televised nationally on PBS. She has appeared with the Washington Choral Arts Society, both as Soprano I in Mahler's Symphony No.8 and then as the soprano soloist for their Christmas concerts at the Kennedy Center under the baton of Maestro Norman Scribner. Lisa has been the soprano soloist in Hadyn’s Lord Nelson Mass and Bach’s Mass in B Minor with the Philadelphia Chamber Orchestra and the Brahm’s German Requiem with the Brooklyn Philharmonic Orchestra. Past orchestral performances also include the Dvorak’s Stabat Mater at Zürich’s Tonhalle, Hermann Sutter’s Requiem in Basel, the Mozart Requiem and Brittan’s War Requiem with Virginia Tech Orchestra and Bruckner’s Te Deum. On the operatic stage, she has portrayed many of the lirico-spinto and young dramatic roles such as, Tosca, Ariadne, Jenufa, Desdemona, Rosalinde, Fiordiligi, Countess, Donna Elvira, Goose Girl, Michaela, Violetta, and Komponist. She has performed with Opera Company of Philadelphia, San Francisco Western Opera Theater, Long Beach Opera, Sarasota Opera, Opera Colorado, Opera Roanoke, Basel, Switzerland, and Saverne, France. She has worked with many leading conductors such as Murray Sidlin, Norman Scribner, David Gilbert, Lou Salemno, Christopher Macatsoris, Neil Varon, Victor DeRenzi, Andreas Mitisek, Stephen White, Stephen Mercurio and John DiCostanzo. Lisa received her education at the Academy of Vocal Arts, The Juilliard Opera Center, Manhattan School of Music, and the University of Idaho Lionel Hampton School of Music. She was a European finalist in the Luciano Pavarotti International Competition, a two- time winner of the Gerda Lissner Foundation grant, a five-time winner of the Sergio Franchi Foundation Grant, and a recipient at the Mario Lanza competition in Philadelphia. Under the tutelage of Dr. Robert T. Sataloff, Lisa has observed voice therapy practices and laryngeal procedures practiced at Philadelphia Ear, Nose And Throat both in the medical office and in the OR at Lankenau Hospital. Lisa has served as an adjunct voice instructor in the Musical Theater M.F.A. Program at Temple University where she continues to teach while working towards a D.M.A. in Voice Performance and a minor in Voice Pedagogy. She is the founder and co-operator of Willson Vocal Academy with her husband, tenor, Ian DeNolfo, which is comprised of 7 teachers and located in Bryn Mawr, PA. She and members of her faculty run a 4 -week intensive Summer Vocal Boot Camp in Wayne, PA which concentrates on different styles of vocal performance and technique, vocal health, acting through song and choreography. Lisa has been an adjunct voice professor at Bryn Mawr and Haverford College and director of Philadelphia International Music Festival Opera Theater Program (PIMF). Lisa is currently a student of Dr. Christine Anderson and has been a voice student of Madame Elisabeth Schwarzkopf, Ms. Margaret Baroody, Dr. Robert T. Sataloff, Bill Schumann, Marlena Malas, and Adele Addison. Lisa is then president of GPNATS and is a sustaining member of The Voice Foundation. Lisa’s esteemed students have been featured in the title and lead roles in Broadway productions of Hamilton, Wicked The Great Comet of 1812, and Matilda. She and the students from the Willson Vocal Academy participate annually at The Voice Foundation’s Annual Symposium on Care of the Professional Voice, the NATS Student Auditions, and the Classical Singer Competition. She recently joined the board of the Bryn Mawr sacred Women’s Project. She and her husband have two wonderful sons, Joseph and Alexander DeNolfo.