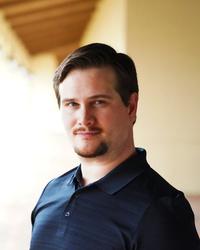 Baritone Mitchell Hutchings (www.mitchellhutchings.com) has performed throughout the United States and abroad from Carnegie Hall to the Muzeum Antonína Dvořáka in Prague. His specialty includes helping students develop a singing voice without obstruction and over modification while also focusing on expanded breath, clean and balanced phonation, and smooth changes in registration. He has a record of success, particularly with young artist-level and developing singers.

Recent performances from Dr. Hutchings include the role of John Proctor in The Crucible with Hartford Opera Theater at the Wadsworth Atheneum, and Michele in Il tabarro with Utah Festival Opera & Musical Theatre at the Ellen Eccles Theatre, Marcello in La bohème with Rochester Lyric Opera, and as a soloist in Handel’s Messiah with the Buffalo Philharmonic Orchestra at Our Lady of Victory Basilica.

Concert credits include Brahms’ Ein deutsches Requiem with the Rochester Oratorio Society, Handel’s Messiah with the Chamber Music Society of Olean, Mozart Requiem and Beethoven Choral Fantasy with the National Sacred Honor Choir in Carnegie Hall, and the Beethoven Mass in C with the Tallahassee Community Chorus.

Highlights on the stage include the title role in Gianni Schicchi with Charlottesville Opera, Escamillo in La tragédie de Carmen with Pensacola Opera, Ben in The Telephone with Opera Saratoga, Marco in Gianni Schicchi with Opera Maine, Marcello in La bohème with the National Lyric Opera of New York, Buff in Der Schauspieldirektor with the Rochester Lyric Opera, Father in Ragtime and Pete in Show Boat with Utah Festival Opera & Musical Theatre, and he was “exemplary” (Sylva Herald) in the title role in Sweeney Todd, The Demon Barber of Fleet Street, under the direction of Broadway legend Terrence Mann, where “his range and presence commanded attention any time he was on stage” (Sylva Herald). Hutchings has performed and received training as a young artist with Opera Saratoga, Pensacola Opera, Des Moines Metro Opera, Charlottesville Opera, Opera Maine, and Dicapo Opera Theatre.

Mitchell Hutchings has studied with Robert Swensen, David Okerlund, and Rebecca Cook-Carter. He holds a Bachelor of Music degree in Vocal Performance from Western Carolina University (2016 Young Alumnus Award), and a Master of Music degree in Vocal Performance from Florida State University (2015 Thirty Under 30 Distinguished Young Alumni award winner). He holds a Doctor of Musical Arts in Performance and Literature with a minor in Voice Pedagogy and Pathology – Interdisciplinary from the Eastman School of Music. He makes his home in Florida with his spouse, composer Dr. Sarah Hutchings.

Voice Type: Baritone
Music Styles Taught: Pop; Opera; Folk; Rock; Classical; Musical Theatre
Availability: I am available as a performer; I have a wait-list for private lessons; I am currently accepting private students; I am available as a clinician or presenter; I accept students through a college or university program