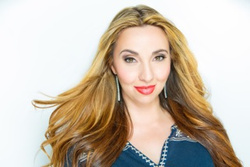 Marisa Rawlins-Bradfield is a Los Angeles native who has been teaching voice and choral directing for over seventeen years. From an early age, she has had the opportunity to sing for radio, television, and feature films, along with performing with some of the most prestigious choral ensembles in the United States. She is currently the Department Chair of the Performing Arts Dept. and Choral Music Director at Providence High School. Along with her teaching, Marisa owns a private voice studio and serves as the Vice President of the Southern California Vocal Association Vocal Solo Competition. She is honored to serve as Music Director at Bethlehem Lutheran Church in Granada Hills, where she conducts the adult and children’s choirs. In past years, Marisa was the Artistic Director of the Los Angeles All-Diocese Queen of Angels Honor Choir and Choral Director at the Los Angeles Music and Art School in downtown, Los Angeles. Marisa received her Bachelor of Arts degree in Music Education with a choral emphasis from California State University, Northridge where she studied with Paul Smith, and attended Mount San Antonio College where she studied with Bruce Rogers. Marisa holds a Master of Arts degree in Music Education and Teaching Credential from the University of Southern California, where she was the recipient of the USC Flora L. Thornton School of Music 2009 Honors Convocation, D ’Addario Foundation Achievement Award. She is an active member of ACDA, CMEA, NATS, SCVA, USC LAA, Kappa Delti Pi, & SAG AFTRA.

Marisa is passionate about sharing her knowledge and experience concerning the healthy singing voice for all genres and levels of proficiency. Ms. Rawlins has had the pleasure of working with professional recording artists, conservatory music program students, and individuals who love sing as a hobby. Her students have appeared on the Disney Channel, ABC, FOX, Lifetime, along with notable performances at the Hollywood Bowl, the Luckman Performing Arts Center, The Broad Stage, the Aratani Japan American Theater, the Ford Amphitheater, the Dorothy Chandler Pavilion, and the House of Blues. Marisa enjoys coaching students on audition preparation, and has had successful acceptances to the University of Southern California, Berklee College of Music, University of California, Santa Barbara, Chapman University, Renaissance Arts Academy, the Los Angeles County High School for the Arts, & Colburn School of Music.

Voice Type: Mezzo-soprano
Music Styles Taught: Pop; Jazz; Folk; Gospel; Rock; Classical; Musical Theatre
Availability: I am available as a performer; I am currently accepting private students; I am available as a clinician or presenter; I offer lessons in a group environment