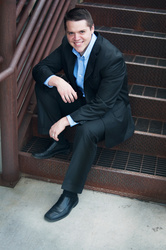 Title: Associate Professor of Voice
Bio: Tyler Nelson is one of America’s most promising young tenors. Already enjoying success in a wide variety of concert repertoire, his recent engagements have included the Britten Serenade with the Utah Valley Symphony, Beethoven’s 9th Symphony with the Saginaw Bay Symphony, Mozart Requiem with Utah Chamber Artists, The Creation with Thomasville singers, and Orff’s Carmina Burana with the California and Reno Symphonies. Mr. Nelson also has a wide range of operatic experience. During successive seasons with Ohio Light Opera he sang Sancho in Man of La Mancha, Matthew in Maytime, Dr. Blind in Die Fledermaus, Pietro in The Firefly, Philipe in New Moon, and Mr. Collins in the world premier of Pride and Prejudice. Arts blog CoolCleveland.com commented: “Tyler Nelson, as that erstwhile clergyman, could steal the show if he tried. As it was, he nearly brought down the house with I Aim to Please.” Opera News, reviewing the same performances, called his singing “mellifluous”. Mr. Nelson’s other operatic roles include: Almaviva in Il barbiere di Siviglia, Male Chorus in Rape of Lucretia, Gherardo and Rinuccio in Gianni Schiichi, Maese Pedro in El retablo del Maese Pedro, Father in 7 Dedly Sins, and La Rainette in L’enfant et les sortileges, which he has performed with Lorin Maazel and the Châteauville Foundation as well as the Mayor in Albert Herring, which he performed with both the Châteauville Foundation, and the Merola Opera Program. His international debut was in Mazatlan, Mexico, performing the role of Shallow in Gordon Getty’s Plump Jack, under the direction of the composer. Robert Commanday of San Francisco Classical Voice said of Mr. Nelson’s performance: “Tyler Nelson, a young tenor living in Florida, did a captivating number on Justice Shallow. His diction was impeccable and his animation as the silly, ridiculous squire won for him alone laughs that were independent of the lines. His bright, keenly focused, vibrant tenor invites Mozart. He has a big future.” Recent seasons have included debuts with Chicago Opera Theater in the role of Delfa for their production of Giasone, and a return this season for their production of Médée. Of his performance in Giasone, Mark Thomas Ketterson of Opera News commented: Tyler Nelson was hilarious as a travesti Delfa, managing the passaggio of his tenor with notable skill and looking for all the world like Mollie Sugden's Mrs. Slocombe on Are You Being Served?” Venus Zarris of Chicago Stage Review in a review of the production stated that: “Tyler Nelson commits comic operatic highway robbery by embodying all that is hysterical about drag, as Delfa the maidservant to Medea, while simultaneously delivering some of the production’s most superb singing.” Recently, Mr. Nelson debuted in the role of Count Almaviva in Rossini’s Il Barbiere di Siviglia, with the national Center for the Performing Arts in Beijing China, and at the Castleton Festival, under that baton of Maestro Lorin Maazel. He also performed as the tenor soloist in Andrew Lloyd Webber’s Requiem, with the Castleton Festival and Ferrando in Cosi fan tutte with North Carolina Opera. Upcoming engagements include a return to the Castleton festival as Don Ottavio in Don Giovanni. Mr. Nelson currently serves as the vocal area coordinator of the vocal department at Utah Valley University.
Voice Type: Tenor
Music Styles Taught: Opera; Classical; Musical Theatre
Availability: I am available as a performer; I am currently accepting private students; I accept students through a college or university program