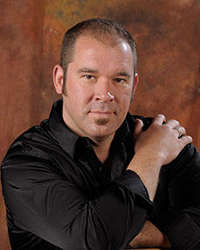 Bio: Thomas Erik Angerhofer, baritone, has been praised by audiences and critics throughout Europe and North America for over two decades. “A powerful and sweet baritone,” his versatility as a singing actor spans all major genres and periods, from the operas of Handel and Heggie, to the music of Mozart and Mahler. Recent operatic appearances include Marcello in La Boheme, Giorgio Germont in La Traviata, and Joseph de Rocher in Dead Man Walking. Concert appearances include Orff’s Carmina Burana, Beethoven’s Symphony no. 9, Mozart’s Requiem, and Bach’s St. John Passion. Favorite Musical Theater roles include Skly Masterson in Guys and Dolls, Cinderella’s Prince / Wolf in Into the Woods, and Emile DeBecque in South Pacific. His international performance career has brought him as far as Beirut, Lebanon, as well as the major cities in Germany, Austria, Italy, Switzerland, France, The Netherlands, and England. While living in Colorado, Erik has enjoyed performing with major Front Range organizations such as Opera Colorado, Central City Opera, Opera Fort Collins, Opera Theater of the Rockies, Loveland Opera Theater, Colorado Symphony Orchestra, Boulder Philharmonic, Greeley Philharmonic, Colorado Springs Philharmonic, Longmont Symphony, and many more. Erik is an Associate Professor of Voice at Ithaca College, and has served on the voice faculties at Missouri Western State University, Metropolitan State University of Denver, University of Colorado at Denver, and Parlando School for the Arts. His students have been awarded scholarships to further their training at highly competitive undergraduate, graduate, and young artist programs throughout the country and abroad in classical voice, opera, and musical theater. Erik employs his 30+ years in music and martial arts to help his students get the most from their instruments, bodies, and minds.

Availability: I am available as a performer; I have a wait-list for private lessons; I am currently accepting private students; I am available as a clinician or presenter; I offer lessons in a group environment; I accept students through a college or university program