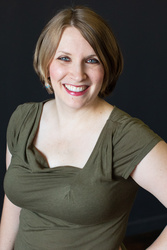 Kim Lamoureux is a performer, voice teacher, and vocal coach who strives to bring a spirit of openness, honesty, ingenuity, and a zest for unfettered freedom and exploration into whatever she does.

As a performer, Kim primarily specializes in operatic repertoire. She has been praised for her “clarion range and delicate tone,” but she would tell you that her greatest strengths as a vocalist lie in her tenacity, attention to detail, and dedication to the craft. Some of her favorite mainstage performances have included the title role in Handel's Silla (Cambridge Chamber Ensemble), Adele in Die Fledermaus (Opera 51, NEMPAC, Riverside Theater Works), Azzurina in the world premiere of DiOrio's The Little Blue One (Juventas New Music Ensemble), Elsie in The Yeoman of the Guard (Savoyard Light Opera Company) and the fight captain and role of Stéphano in Roméo et Juliette (Opera51). She has additionally performed in concert with organizations such as Cape Symphony, Odyssey Opera, the Carlisle Chamber Orchestra, the New England Gilbert and Sullivan Society, the North Shore Summer Concert Series, and the Concord Orchestra.

Kim has also taken a deep dive into the world of interactive theater, and has had immensely satisfying experiences exploring the creative outlets of improvisation and from-the-ground-up character development through productions such as The New England Pirate Faire and Cry Innocent, among others. Kim also occasionally dabbles in television and film, and has done some niche work centering around the history and culture of the Salem Witch Trials. She can be seen portraying historical figures such as Anne Putnam Sr. and Sarah Cloyce in TV specials with the National Geographic Channel, The Travel Channel, and in educational films with Cinema Salem.

Kim has a deep love for mediums that connect to movement and the body, and has delved into creative outlets such as contact improvisation, stage combat, and partner acrobatics. Kim takes great joy in the exploration of new mediums of artistic expression, and finds the experience of being a beginner at something to be deeply informative to her practice as an artist and teacher.

Kim is currently located on the North Shore of Boston, and is the owner of Kim Lamoureux Voice Studio, a studio dedicated to helping singers unleash their creativity and bring the fullest, joyful expression of themselves into their artistry and artistic expression. She is currently accepting both in person and virtual clients.