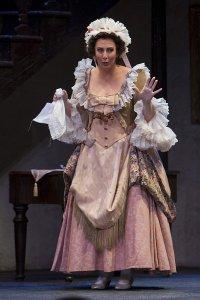 Bio: Stephanie Foley Davis was praised by the New York Times in her Glimmerglass Festival debut in The Tender Land as “a poised, touching Ma Moss” and Opera News said she was “a loving, careworn Ma, warm of voice and presence.” Ms. Davis subsequently returned to Glimmerglass to create the role of Mary McCarthy in the world premiere of Jeanine Tesori’s A Blizzard in Marblehead Neck. Of her role debut as Charlotte in Nightingale Opera Theatre’s production of Werther, Cleveland Classical said, “…Foley Davis and Culver were terrific in their singing and in delineating their sadness.” Ms. Davis has appeared in leading roles throughout the US with companies such as Arizona Opera, Nashville Opera, Nightingale Opera Theatre, Orlando Philharmonic and almost every professional opera company in North Carolina, including Opera Carolina, Piedmont Opera, North Carolina Opera, and Greensboro Opera, to which she will return as Berta in Il Barbiere di Siviglia in January of 2018. Stephanie also will return to the Winston-Salem Symphony to perform the mezzo-soprano solos in Bernstein’s Symphony No. 1 “Jeremiah” and Jenkins’ The Armed Man under the baton of Robert Moody, after which they will reprise the concert with the Portland Symphony Orchestra (Maine). Other recent credits include Mercedes in Greensboro Opera‘s Carmen, her first Suzuki in Piedmont Opera’s Madama Butterfly, the mezzo soloist in the Winston-Salem Symphony’s Beethoven’s 9th, and as a distinguished alumna in Verdi’s Requiem at The University of North Carolina at Greensboro. Joseph Newsome (Voix des Arts) said, “Verdi entrusted the first phrases of ‘Lux æterna luceat eis, Domine’ to the mezzo-soprano soloist, and it is difficult to imagine that he could have expected them to be sung more handsomely and incisively than Foley Davis sang them in Greensboro.” Stephanie created the role of Flo in the World Premiere of Libby Larsen’s Picnic in April 2009, commissioned by the UNCG School of Music. Ms. Davis is currently Chair of the Voice Faculty and Director of Community Engagement at The Music Academy of North Carolina, where she has been teaching voice since 2011.
Voice Type: Mezzo-soprano
Music Styles Taught: Pop; Opera; Jazz; Folk; Gospel; Rock; Classical; Musical Theatre
Availability: I am available as a performer; I have a wait-list for private lessons; I am available as a clinician or presenter