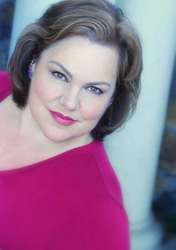 Known for her flexibility of style, Jenny Matteucci performs, directs and conducts in many different venues all over the San Francisco Bay Area. As a young singer, Jenny relocated from Davis, Ca. to San Francisco to study at the San Francisco Conservatory of Music. She soon became active in the San Francisco theatre and cabaret scene where she continues to perform today. Her recent appearances include: “Music Man” (Mrs. Paroo) Broadway By the Bay, “Man of La Mancha” (Maria) Custom Made Theater, “Beauty and the Beast” (Madame de la Grande Bouche) Berkeley Playhouse, Woodminster and The Mountain Play. “Side by Side by Sondheim” Douglass Morrision Theater, “Chicago” (Mama Morton) Woodminster Summer Theater and Stage One, “Berlin to Broadway” with Masquers Playhouse, Marmee in “Little Women” and Margaret Johnson in “The Light in the Piazza” with NDNU, and Steve Silver’s Beach Blanket Babylon. She has performed with Theater Works and Marin Theater Company which included the popular Words and Music series. Her greatest passion is to perform her cabaret show entitled “For the Love of…” along with her husband Mr. Daniel Lockert. Jenny also played herself in the Craig Bohmler/Marc Jacobs musical All the More to Love, which was based on the real-life, plus-size consignment store of the same name that Jenny owned with her mother, Erna. Ms. Matteucci is currently the conductor of the Festival Chamber Chorale, and the Festival Chorus for the Mendocino Music Festival and in addition, teaches group voice, and performance classes. Jenny is also the conductor for FCCPA Chancel choir, FCCPA Women’s ensemble and for the Palo Alto Oratorio Society. She and her husband Daniel Lockert team up for masterclasses for such organizations as the National Association of the Teachers of Singing (NATS) and Lamplighters and Woodminster Summer Theater. As an educator, Jenny is part of the voice faculty of Santa Clara University and formerly on the faculty of Notre Dame de Namur University. She runs a busy private voice studio in her home. She holds a BFA and MFA in Vocal Performance from Notre Dame de Namur University. For NDNU, she recently directed Cendrillon, Opera Rocks, The 25th Annual Puntam County Spelling Bee (Broadway World nominee for best director), and was assistant director for Lettice and Lovage (Hillbarn Theater), and was Co-Director for De España Vengo at NDNU. Her passion for vocal and choral repertoire has inspired her to create many cabaret, and small venue shows.

Jenny lives in Oakland with her husband, Daniel, and is the proud mother of two adult children Will and Beth, and a perfect dog named Maurice.

Voice Type: Soprano
Music Styles Taught: Opera; Jazz; Classical; Musical Theatre
Availability: I am available as a performer; I have a wait-list for private lessons; I am currently accepting private students; I offer lessons in a group environment