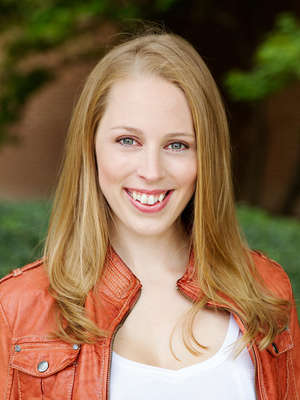 Bio: Amie Debrone holds an Honours BMus (voice) and a Minor in Languages from Wilfrid Laurier University, and completed the Banff Centre’s Musical Theatre Intensive Program (2013), and New York University's Vocal Pedagogy Intensive Program (2015) led by Dr. Brian Gill. She also is an active performer and teacher. She has been described as “outstanding vocally and in stage presence” by Opera Canada, and has performed with various ensembles and companies including the Grand Philharmonic Choir, Drayton Entertainment, and Arcady. Favourite credits include "Sister Act" and "9 to 5: The Musical" (Drayton Entertainment), Kitty in "The Drowsy Chaperone" (KW Musical Productions), Mother Marie in "Dialogues of the Carmelites" and Third Spirit in "Die Zauberflote" (WLU Opera) and she was one of the top 100 Dorothy-hopefuls on CBC’s Over the Rainbow. She has music directed and assistant music directed for various productions including Next to Normal (MD/violin), Titanic: The Musical (vocal coach/assistant MD), Seussical the Musical (vocal coach/assistant MD) and Carrie: The Musical (assistant MD). When teaching and coaching, Ms. Debrone puts emphasis on bodywork and Alexander Technique using science and fact to understand and train the voice, and encourages students to consider character and story to interpret their text and find a deeper connection to their voice through that understanding.
Voice Type: Mezzo-soprano
Music Styles Taught: Pop; Opera; Jazz; Folk; Gospel; Rock; Classical; Musical Theatre
Availability: I am available as a performer; I am currently accepting private students; I am available as a clinician or presenter; I offer lessons in a group environment