Anton Belov, Associate Professor at Linfield College, is the author of Singing in Russian as well as a collection of translations and phonetic transcriptions of several Russian opera libretti. Discover both Russian diction and repertoire in three sessions led by Anton at the NATS 2019 Summer Workshop, sponsored by the RCM Certificate Program. Anton has provided an overview of what to expect from his sessions. We invite you to take part and improve your musical interpretations of this beautiful language.

Read more about ANTON BELOV
and the other workshop presenters.

Can you fill people in on a couple of takeaways from your presentations?

Contemporary American singers are expected to be at ease with Italian, German, French, and of course, their native English. Russian, on the other hand, still strikes fear into the hearts of both singers and coaches. The reasons for this are many. Not the least of these is cultural—for decades in the popular culture Russia was either exoticized or caricaturized. Of course, another major reason is the Cyrillic alphabet and the overall “foreignness” of the Slavic languages. The third reason is that Russian repertoire is often perceived as being either overwhelmingly idiosyncratic or excessively dramatic to be suited for a young singer.

But listen to a fine artist singing Russian repertoire. Even if one doesn’t understand the language, the passion, warmth, sensuality, and extremes of sorrow and exuberance that distinguish Russian culture are evident in the nature of its sounds. Be moved and motivated by that, and toss the fear aside!

The key to approaching the study of Russian pronunciation is, first of all, a clear and concise phonetic transcription. A word of caution—many editions of Russian art songs and arias available in the United States use English transliterations. Unfortunately, these editions provide mere approximations. The International Phonetic Alphabet allows for much more precision in the transcription and therefore will be used in my workshops. Hence, a singer or coach familiar with the IPA will need to learn only a few symbols specific to Russian phonetic system.

If I am a lyric diction teacher, and I’m attending the workshop, what sort of new perspectives will I gain, so that I could say I was really glad I took part in the workshop?

In the final analysis, the phonetic transcription of any language is quite mechanical: just follow the rules, and eventually, your phonetization will resemble the ‘correct’ sounds. Yet a singer that simply sings transliterated syllables will never sound native. What is often missing from the standard diction classes is the study of the expressive patterns of the language. Through years of coaching Russian, I discovered a fascinating truism—correct inflection equals 80% of expression. Yet how does one begin to study these rhythmic patterns without being fluent in the language? The answer is the study of the poetic meters that govern Russian romantic literature. You will soon discover that like in most European languages, these meters are derived from ancient Greek and Latin.

Are there any humorous or particularly fond recollections that led you to becoming a specialist on teaching diction?

Like in many languages, a minute variation in pronunciation can radically alter the meaning of words. For example, а slight modification in a vowel quality can change the verbs to forget (забыть) into to beat someone to death (забить). One of the funniest examples of my career comes from my memories of graduate school. I was performing in the production of Eugene Onegin. In act two, Olga tells Lensky that he is rather strange. Unfortunately, she wasn’t able to pronounce one important consonant. The word that she uttered turned out to be a rather rude profanity. The audience that contained many Russian immigrants erupted in laughter.

How would the subject matter relate to those who teach in an independent studio? 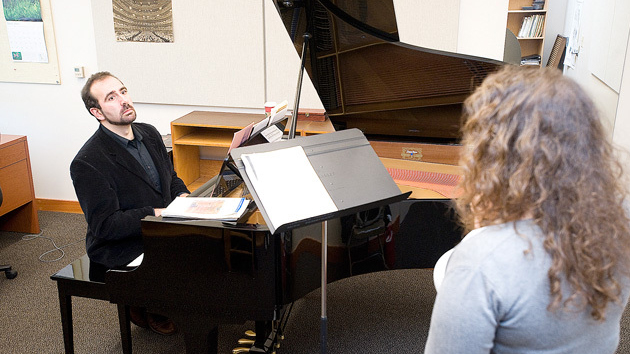 Russian vocal repertoire is vast and diverse. There are songs of tremendous dramatic power as well as elegant gentle romances. There are pieces written in a declamatory theatrical style, such as Mussorgsky’s cycle Nursery, as well as flowing lyrical pieces by Arensky and Dargmyzhsky. There are virtuosic piano accompaniments by Medtner and simplistic ones by Glinka and Gurilev. Russian repertoire is so diverse and multi-faceted that a classical singer of any voice type, dramatic temperament or level of expertize can find suitable material.

Are there other thoughts you’d like to add about the workshop?

• When you begin to study Russian diction treat it with the same respect you treat other singing languages.
• Approach this language with an analytical mind, understand how it works, do not be satisfied with mere approximations!
• Do not invent your own sounds! It is a common mistake of an American singer to replace certain unfamiliar sounds with some that simply do not exist in Russian.
• Remember, in Russian (as well as in any language) a minute variation in the pronunciation can drastically alter the meaning of a word!
• Finally, go beyond phonetics. Try to comprehend the meaning of the poetry, its rhyme scheme and rhythmical structure.