BOSTON – Soprano Melissa Wimbish won the 43rd NATS Artist Awards competition for singers on Saturday evening at the Boston Marriott Copley Place, collecting more than $10,000 in cash and prizes in the process.

The NATSAA finals were held on the opening day of the 53rd National Conference. Eight finalists competed for the top award, which is funded by the NATS Foundation, AIMS in Graz, Hal Leonard Corporation, Futura Productions and Distinguished Concerts International New York.

Wimbish receives $5,000 in cash, $2,500 for a winner’s recital at the 2016 NATS Conference in Chicago, $2,500 towards personal expenses for a New York solo recital debut sponsored by DCINY, a full-tuition scholarship to AIMS, and a studio recording package from Futura Productions. Hal Leonard will also provide a $1,000 gift certificate for music.

“It was an incredible evening with outstanding performances by all singers,” NATS Executive Director Allen Henderson said. “This competition is one of the longest-standing NATS traditions, and tonight was another proud chapter in its history.”

Wimbish, of Baltimore, Md., has already enjoyed a noteworthy career. She has been praised by The New York Times for her “stylish singing” and by The Boulder Daily Camera as “simply incredible…the highlight of the entire evening,” soprano Melissa Wimbish is quickly garnering recognition for her artistry, technical prowess, and captivating stage presence.

During the 2013/14 season, Wimbish will perform the role of the History Teacher in the highly anticipated NYC-premiere of Paul's Case by composer Gregory Spears and directed by Kevin Newbury. With Opera AACC, she will debut the role of Micaëla in George Bizet's Carmen followed by another debut with American Modern Ensemble in Robert Paterson's Ghost Theater. Alongside pianist and composer Tom Cipullo, she will appear in recitals presented by Urban Arias at Atlas Performing Arts Center in Washington, D.C.

Her abilities as a versatile young artist have earned a number of performance engagements both on and off the opera stage. An equally compelling stage actress, her resume includes a healthy roster of theater experience. 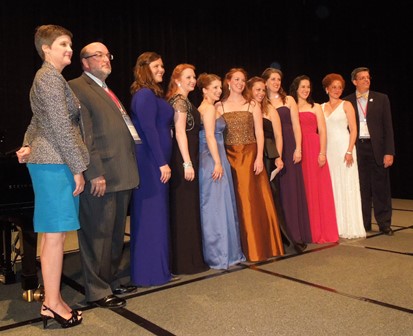