NEW YORK – Nathaniel Sullivan placed first in the 2018 National Music Theater Competition on Saturday evening, Jan 6, in The Roosevelt Hotel Grand Ballroom in midtown Manhattan. The New York-based baritone collected $7,500 in cash and prizes. He currently studies with Sanford Sylvan and formerly studied with Alisa Belflower at the University of Nebraska–Lincoln.

The semifinal and final rounds of the National Music Theater Competition were held in conjunction with the National Association of Teachers of Singing Winter Workshop and hosted in front of an audience of the music industry’s top professionals. Adjudicators for the final round were Michael Cassara, Crista Moore, and Edrie Means Weekly. Competition sponsors include the NATS Foundation, Hal Leonard Corporation, MusicalTheaterSongs.com, Appcompanist, and Jolie Stratton.

As first place winner, Sullivan collects a $5,000 cash award, a $1,000 gift certificate from Hal Leonard Corporation, a winner’s concert at the upcoming NATS National Conference in Las Vegas, and a year subscription to Appcompanist. Passionate about incorporating music theater performance into his classical vocal studies, Sullivan has performed in the Celebration of American Song series at University of Nebraska–Lincoln, an historic survey of the American influences on the music theater and classical vocal repertoires. The series is curated by Alisa Belflower, whom Sullivan credits as highly instrumental in his artistic development and the source of most of his music theater training.

The National Music Theater Competition (NMTC) was launched in 2011 as the first national competition for the emerging professional music theater soloist. Now in its fourth iteration, NMTC has provided industry connections to past competitors and winners that have led to their success. 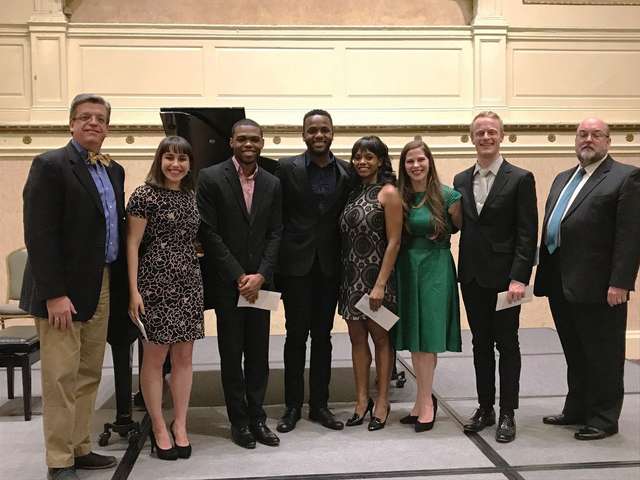 As an avid performer of opera, oratorio, art song, and musical theatre, baritone Nathaniel Sullivan “works to infuse each performance with his unique, personal vitality” (arts.unl.edu). Having performed works in both the classical and contemporary operatic repertoires, Sullivan's roles have ranged from Papageno (Die Zauberflöte), the Count (Le nozze di Figaro), and Sid (Albert Herring), to the roles of Dr. Pangloss/Martin (Candide) and the Baritone (Philip Glass's Hydrogen Jukebox). In 2016, Sullivan joined Beth Morrison Projects to cover the roles of the Young Monk and Gilgamesh in Scott Wheeler's Naga and Paola Prestini's Gilgamesh, as part of the world premiere of the Ouroboros Trilogy in Boston. Sullivan has attended the opera studio program at the American Institute of Musical Studies in Graz, Austria, where he had the opportunity to work with Puerto Rican tenor Antonio Barasorda.

In addition to opera performance, Sullivan frequently engages in oratorio and other concert performances around the country. In 2014, he joined Maestro Edward Polochick and the Lincoln Symphony Orchestra in a concert featuring scenes from Mozart's Le nozze di Figaro, performing the role of the Count. He has joined Maestro James Bagwell and the Bard Conservatory Orchestra and Chorus as the bass soloist in Mozart's Coronation Mass (2015) and in the Winter portion of Haydn's The Seasons (2016). For his October 2017 performance as the chansonnier in HK Gruber's orchestral pan-demonium Frankenstein!!, Sullivan was regarded as "ebullient" and "a marvelous actor," having given "allegiance to both music and words" (ConcertoNet). Later that month, he performed as the bass soloist in J. S. Bach's Mass in B Minor with the Blanche Moyse Chorale & Memorial Orchestra, bringing "natural expressiveness and warmth" to the "Et in Spiritum Sanctum" (Rutland Herald).

Sullivan also takes great interest in the art song and chamber repertoires, with a particular focus on recently composed works. In 2016, he premiered five new pieces by students of composer Aaron Jay Kernis, alongside a nine-part chamber ensemble made up of members of the Albany Symphony, conducted by Maestro David Alan Miller. Sullivan's first foray into chamber music was a performance of Milton Babbitt's Two Sonnets for baritone, clarinet, viola, and cello, performed at Bard College in 2016. The following year, Sullivan premiered the piece "Where I Lived, and What I Lived For" by composer Gregory Spears, as part of a recital of premieres at the Morgan Library & Museum in New York City.

Passionate about incorporating music theater performance into his classical vocal studies, Sullivan has performed in five concerts in the Celebration of American Song series, an annual historical survey of the American influences on the music theater and classical vocal repertoires, curated by Alisa Belflower at the University of Nebraska–Lincoln. He has appeared in four premieres/workshops of new musicals: Big Red Sun by Georgia Stitt & John Jiler, Cross That River by Allan & Pat Harris, A Year in Jackson by Joey Contreras & Laura Kleinbaum, and American Smoothie by Nick Jester & David von Kampen. Other music theater roles Sullivan has performed include Stine (City of Angels), the Wolf (Into the Woods), Daddy Warbucks (Annie), and Sky Masterson (Guys & Dolls). Sullivan also won first place in the first ever NATS National College Musical Theatre Auditions, in 2014.

Sullivan has been the recipient of numerous awards and scholarships, including the 2014 Orpheus Vocal Competition’s Bizet Award and several NATS regional and national awards in both classical and musical theatre competitions. He has received two encouragement awards from the Nebraska District of the Metropolitan Opera National Council Auditions, in 2012 and 2013. Sullivan received his bachelor’s of music degree from the University of Nebraska–Lincoln, where he graduated in 2014 as a Chancellor’s Scholar and was the recipient of the Presser Foundation Scholarship, the Donald Walter Miller Scholarship, the Don & Carole Burt Scholarship for Vocal Excellence, and the George Beadle Scholarship. In 2017, Sullivan received his master's of music degree from the Bard College Conservatory of Music's Graduate Vocal Arts Program. He is currently based in New York City, where he participates in various performance opportunities, sings in the professional choir at The Brick Presbyterian Church, and acts as Operations Administrator for Resonant Bodies Festival. Next summer, Sullivan will participate in the Tanglewood Music Center, as a 2018 Baritone Fellow.