The Voice Foundation board awarded NATS Executive Director Allen Henderson with the 2022 VERA (Voice Education Research Awareness) Award for his “outstanding contributions to the field of voice” on June 3 in Philadelphia as part of the foundation’s annual symposium.

The Voice Foundation created the VERA Award to recognize: 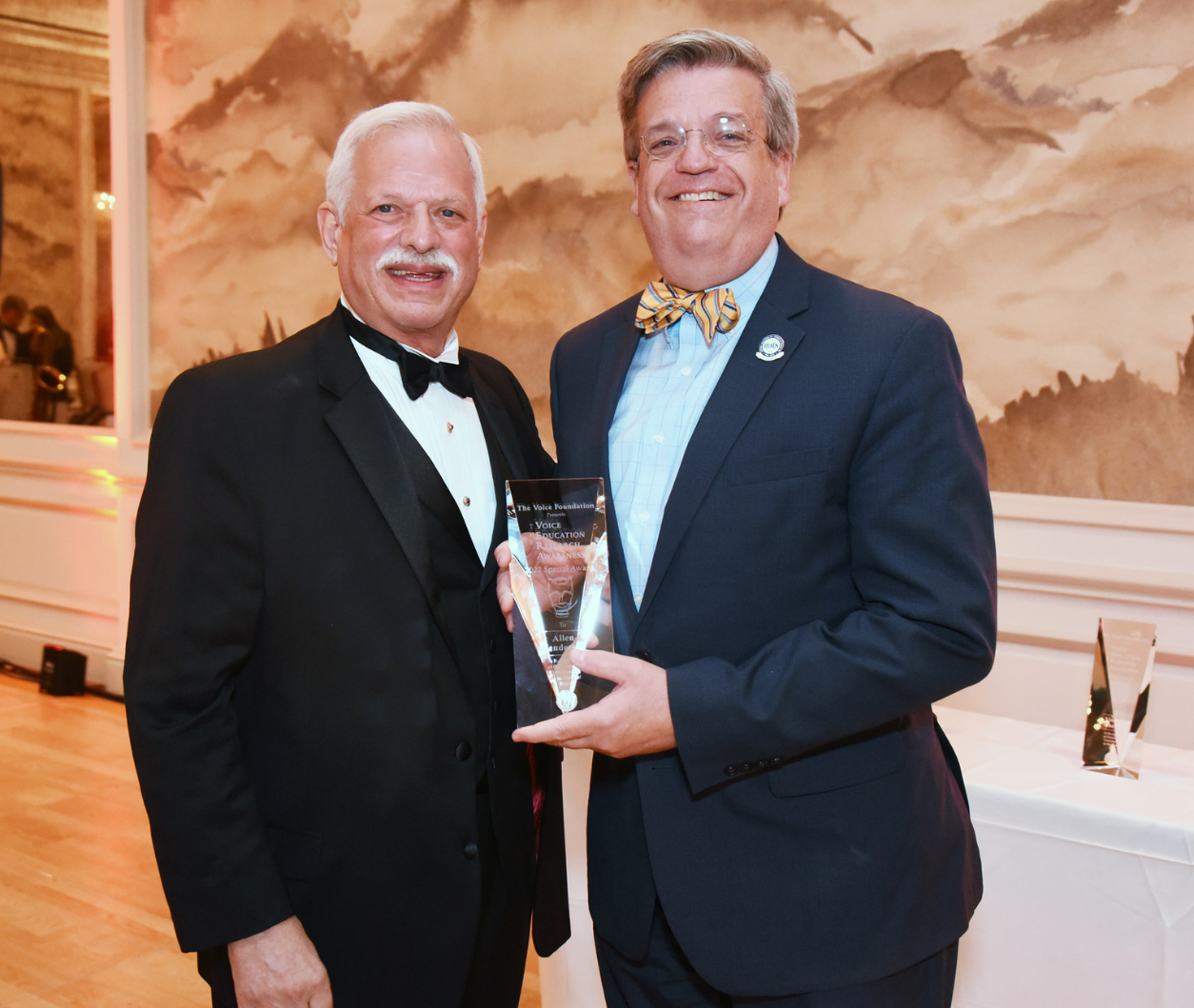 Henderson has served in his current role with NATS since 2008. Prior to his appointment as executive director, he had been involved with NATS for 15 years. He also is a professor at Georgia Southern University in Statesboro, Georgia. He has held other teaching positions at Oklahoma Baptist University and Austin Peay State University. In these positions, he has taught voice, foreign language diction, opera, choral techniques, choral literature, song literature and directed choirs. He also served as music department chair at Austin Peay and Georgia Southern. Henderson earned his doctorate from the University of Cincinnati.  As baritone soloist, he has appeared in concert, opera, and oratorio across the country. A district winner and regional finalist in the Metropolitan Opera auditions, Henderson was winner of the 1995 National Federation of Music Clubs Artist Awards. He also was a regional finalist in the NATSAA competition and was a participant in the 1993 NATS Intern Program.

During the award presentation, Sataloff remarked that Henderson had been a major contributor to both the Voice Foundation as well as NATS for decades. Sataloff said Henderson led NATS with “quiet, collaborative and considered wisdom.”

The chair praised Henderson’s efforts to integrate the worlds of voice science and voice pedagogy, and he commended the way Henderson incorporated expert opinion and guidance into thoughtful policy decisions. He highlighted Henderson’s extraordinary leadership during the global pandemic, emphaszing how NATS promoted policy grounded in science and that prioritized the health and safety of all singers.

“He created a series of NATS webinars to support stressed and distraught teachers and singers everywhere, as well as the #FightTheFatigue Campaign to advocate for good physical and mental health,” Sataloff said. “His leadership throughout his tenure, and especially during recent challenging times, has been exemplary and should set an example for all of us.”

Henderson did not know he would be receiving the award.

“I am honored and humbled to be named a recipient of the Voice Education Research Advocacy (V.E.R.A.) Award by the Voice Foundation at the Voice Foundation Symposium Gala in Philadelphia,” Henderson shared. “It was a total surprise for this distinguished body to recognize me for my work. Congrats to my fellow awardees rock legend Jon Bon Jovi, baritone Vladimir Chernov, and Brazilian broadcaster William Bonner who have all given so much to the professional voice community.”

Henderson extended his thanks to his inner circle and colleagues.

“Especially in the field of professional voice, no one is an island,” Henderson said. “No one can do it alone. My partner in life Ann Henderson and my children are my bedrock and continue to bless my life in so many ways. I am likewise blessed to work and serve alongside a hardworking board and staff at NATS full of incredible leaders, including current President Carole Blankenship, who have empowered me to represent them and build the partnership networks that allowed us to literally save thousands and thousands of lives during the pandemic. Few bonds have been longer or stronger over the decades than those of NATS and the Voice Foundation. Thank you Dr. Robert Sataloff for your visionary leadership, Maria Russo who “keeps the lights on” at the Voice Foundation offices, and the Board of the Foundation for this award, which is truly a highlight of my career.”