posted on 10:48 AM, December 14, 2017
NATS Artist Awards, National Music Theater Competition, and the debut of a young Norwegian YouTube sensation. Each event is open to the public for $10 general admission seating.

The National Association of Teachers of Singing is gathering the best emerging voice talent from across North America to compete in New York City for the 2018 NATS Artist Awards and 2018 National Music Theater Competition in the Grand Ballroom of The Roosevelt Hotel. The biennial national competitions are taking place in conjunction with the NATS Winter Workshop, expressly hosted in proximity to the music industry’s top professionals.

This will be the 45th competition of the prestigious NATS Artist Awards (NATSAA), designed for singers prepared to launch a professional career. Awards and performance prizes total more than $50,000, including a New York solo debut sponsored by DCINY. The NATSAA final round takes place Friday, January 5 at 7:30 p.m.

The National Music Theater Competition (NMTC) was launched in 2011 as the first national competition for the emerging professional music theater soloist. Now in its fourth iteration, NMTC has provided industry connections to past competitors and winners that have led to their success on Broadway and other venues. The NMTC final round takes place Saturday, January 6 at 7:30 p.m. 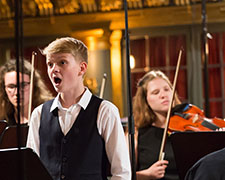 The unveiling of new talent continues on Sunday, January 7 at 4:00 p.m., when Norwegian singing (and YouTube) sensation Aksel Rykkvin will appear in his North American debut. Acclaimed as "the world's premier treble,” the 14-year-old is now training as a baritone. He will give a featured performance and presentation with his "new voice” and share his journey from treble. Aksel was named “Musician of the Year” at the 2016-17 Norwegian Music Competition for Youth. Also taking part in the presentation will be Marianne Lewis, Aksel’s voice coach, and Sean Lewis, collaborative pianist and producer of Aksel’s recordings.

Each event is open to the public for $10 general admission seating and can be purchased at the door. The Roosevelt Hotel is located at 45 East 45th Street & Madison Avenue.