Connect > About Us > Board of Directors > Karen Brunssen 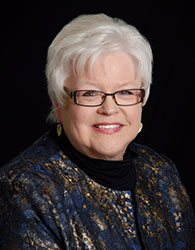 Karen Brunssen teaches at the Bienen School of Music, Northwestern University where she is an associate professor and co-chair of music performance.  She is currently president-elect of NATS (NATS president for 2018-2020 term) and previously served as governor of NATS Central Region. Past positions also include program chair for the 2016 NATS National Conference in Chicago, president of the Chicago Singing Teachers Guild, and vice president and president of Chicago Chapter NATS, where she started the annual vocal competition that has grown to over 400 singers. She is also a member of the American Academy of Teachers of Singing.

Karen is a frequent clinician, master teacher, adjudicator and presenter, most recently at the 2012 and 2014 NATS National Conferences, the 2011 and 2012 NATS Workshops, the 2015 ACDA Conference, West Central Region NATS, Missouri District NATS, Ohio Buckeye, Chicago, Tennessee, and Wisconsin NATS Chapters, Classical Singer Conferences, Association of Teachers of Singing in England, Opera America, and Chorus America. She was a keynote presenter for the International Symposium on Singing and Song at the University of Newfoundland in 2015. Presentations are often based on her article, "The Evolving Voice: Profound at Every Age" (Choral Journal, February 2010), that chronicles changes in respiration, vibration and resonance, and the impact on realistic, age appropriate expectations for vocal development throughout a lifetime.

In 2013 Karen was a Master Teacher for the NATS Intern Program in Nashville. Since 2008 Karen has done five teaching residencies at Cambridge University involving 19 of the colleges.  She taught at the Zürcher Sing-Akadmie in Zurich, Switzerland, the International Institute of Vocal Arts in Italy, the Castleton Music Festival, and Dorian Opera Theatre.

Karen attended Luther College, and did graduate work at the Yale School of Music and Kent State University.   In 2013 she was presented with the Weston Noble Award by Luther College.