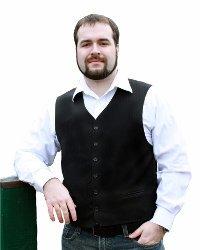 Dr. Holderer has performed as a soloist, in concert and on the operatic stage in the United States, in Canada, Europe, and Asia. He has had leading roles in over a dozen opera productions. Highlights include Pistol in the premiere of a new version of Gordon Getty’s Plump Jack, Harlekin in Ariadne auf Naxos, Figaro in the Marriage of Figaro, Alexis in the premiere of a new production of Anna Karenina, Sarastro in Magic Flute, and Sam in Trouble in Tahiti. Michael has appeared as Bass soloist with the Albuquerque Philharmonic, University of New Mexico Symphony & Chorus, UT Austin / Huston-Tillotson Black History Concert Series; as an Oktavist with Seraphic Fire in Miami and as a member of the Santa Fe Opera Company and with the South Bend Symphony Orchestra. Michael has been seen performing as a soloist and ensemble member of the award winning One Ounce Opera Company, a vanguard of innovative performance of classical repertoire, of which he is a Founding Member and served as Artistic Team Leader.

Dr. Holderer is currently the Director of Music at Paris Junior College where he teaches classes in Music Appreciation, Music Fundamentals, and Music Theory. He also directs the PJC Chorus and Band, and teaches applied lessons in voice, piano, and guitar. Previously, he served as Adjunct Professor of Music at Central Texas College, and from 2008-2016, he served as the Director of Voice at 26 Music Fine Arts Center, in Austin, TX, where he taught voice, piano, and guitar. Other prior teaching experience includes group and applied voice adjunct positions at The University of Texas, Austin, The University of New Mexico, and Voice-Piano Instructor at The Austin Lyric Opera Armstrong School of Music. Dr. Holderer also served as Assistant Choir Director at St. Peter the Apostle Church in Austin, TX.

A consummate recording artist, Michael has a produced an album, For the Love of Singing, and five recent singles: How Much I Love You, Cloudy or Clear, More than Friends, Fields of Elysium, and the double-single Two Marian Antiphons; all available on iTunes and Amazon.com.